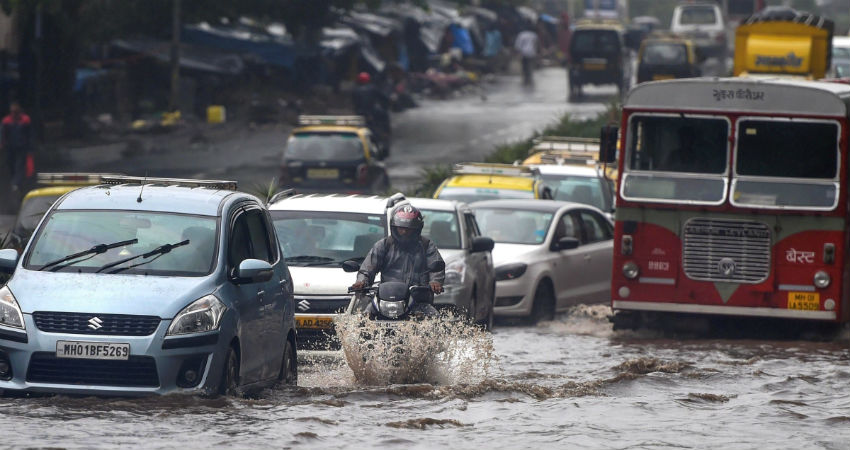 Mumbai: With heavy rains pounding Mumbai and its suburbs, the weather department today issued a ‘red alert’ for the city and adjoining areas and asked the authorities to be prepared to handle any situation. Out of the 150 weather stations in the Mumbai Metropolitan Region (MMR), around 100 recorded over 200mm rainfall in last 24 hours, the India Meteorological Department (IMD) said.

After a brief lull last week, rains resumed since Monday and with the south-west monsoon again getting activated, Mumbai and several other parts of the state witnessed heavy rains overnight and on Wednesday morning. The heavy rains have made a comeback at a time when people across the state are celebrating the 10-day long Ganpati festival.

Heavy overnight rain caused water-logging in several parts of Mumbai, triggering traffic disruptions and train delays this morning. The civic authorities have declared a holiday in schools in the city amid a heavy rain alert. An orange alert – likelihood of heavy to very heavy rain – was sounded by the weather office for the city on Tuesday for the next two days.

Water-logging occurred in areas near Mumbai’s King Circle railway station and Gandhi market. IMD has forecast heavy rain at isolated places in Mumbai till September 6. An ‘orange alert’ with forecast of heavy to very heavy rainfall has been issued for September 6, one of the days for Ganesh Visarjan.

The air services have been affected as several flights have been delayed at airports in Mumbai. In Mumbai, areas including Sion, Parel, Dadar and Byculla received heavy rain since morning. According to a recent update, train services have been temporarily suspended between Thane and CSMT due to heavy water-logging on tracks. Taking to Twitter, Central Railway notified that both up and down fast line train services between Sion and Matunga are held up due to severe water logging. “Our team assessed on the spot as water level is above track level. Kindly bear with us,” said the Central Railway.

Western Railway suburban services are running without any disruption between Churchgate and Vasai Road. However, due to track failure at Virar, the trains between Vasai Road and Virar are running with less frequency. Western Railway in a tweet said,“Kindly note-virar- due to point failure since 9.16 hours on down slow and up fast line, trains being reversed from Vasai Road and Bhayander. Water Logging reported due to heavy rain at Virar .” Due to waterlogging at Sion, Gandhi Market, Pratiksha Nagar, Motilal Nagar, Milan subway, Andheri East and Malad subway, BEST has diverted several bus routes.