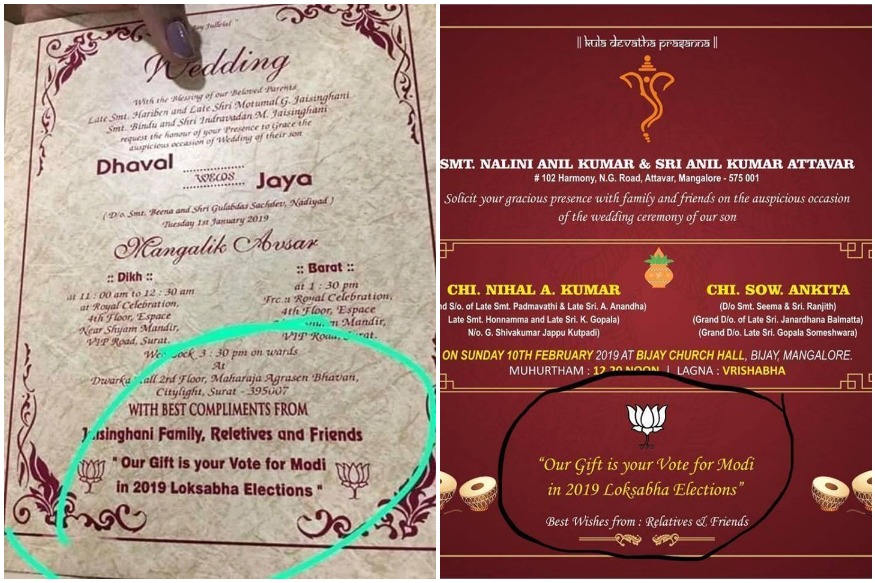 Hyderabad: He doesn’t want guests to bring any gifts on his wedding but his only request to them is to vote for Prime Minister Narendra Modi in the coming general elections.

“Our gift is your vote for Modi in 2019 Lok Sabha election”. A 27-year-old from Hyderabad has printed this on his wedding card.

An ardent supporter of Modi, Mukesh Rao Yande is getting both bouquets and brickbats for his action.

His parents and other family members had reservations over printing this on the wedding card since guests may not like this, as they may be supporters of other political parties. However, Mukesh, an Assistant Engineer in state-run Telangana Power Generation Corporation, had his way.

Hyderabad youth demands vote for Modi instead of gifts on his wedding:

“It is my way of showing endorsement for Narendra Modi’s work and asking support for his re-election,” declared Mukesh, who is getting married on February 21.

He doesn’t mind when people call him “Modi Bhakt”. Mukesh believes that Modi is leading the country on the right path by undertaking several initiatives like “Swaccha Bharat”.

The youth said while he backed Telangana Rashtra Samithi (TRS) in recent Assembly elections, he wants to see Modi back as the Prime Minister.

Doctors at Fortis hospital save 24-week foetus from swine flu