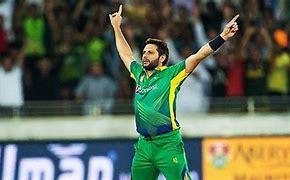 It’s been over nine years since India and Pakistan were last involved in a bilateral cricket series. Political tension on both sides of the borders has restricted India-Pakistan cricket to purely ICC events. However, last week, reports emerged that talks of resumption of India-Pakistan ties are rife. A Pakistani newspaper, going by the name Jang, quoted an anonymous source from the Pakistan Cricket Board suggesting the same.

While former cricketers from India and Pakistan do not appear confident at all about the possibility of it happening, Shahid Afridi, has given his insights as to why resumption of India-Pakistan bilateral series is the way forward for both teams.

“Cricket between Pakistan and India is very important. Sports should be kept away from politics. Relations between the two countries can improve because of cricket,” Afridi was quoted as saying by Cricket Pakistan.

Although India and Pakistan getting involved in bilateral ties remain a far-fetched idea, Afridi reckons the resumption could only mean good things for both nations. “I have said this before as well, Indian cricketers enjoy coming to Pakistan. You can improve relationships through sports but if you don’t want to improve them then they will remain the same way,” Afridi added.

Meanwhile, Ramiz Raja has batted for India and Pakistan facing each other in the next cycle of the World Test Championship. Raja suggested a new format for the next WTC, where all teams should face each other, which raises hopes of a Test match between India and Pakistan, the last of which was played in 2007.

“The current format was lopsided and prolonged and it made no sense not having India and Pakistan series. Teams didn’t play the same number of matches and even the points system was weird. There should have been a 3-month window and everyone should have played against each other,” he had said on YouTube Channel Cricket Baaz.