UP’s economy has taken a new flight due to the big decisions of Chief Minister Yogi Adityanath. Along with dealing with Corona, the Yogi government has also achieved tremendous success on the economic front. The state government was successful in accelerating the economic activities of the state even during the epidemic period. About two months before the completion of the financial year, the Yogi government has achieved a 92 percent revenue target.

Chief Minister Yogi Adityanath’s big decision to keep pace with the industry, trade, agriculture, and government schemes is clearly visible in the economy of Uttar Pradesh and the revenue of the government, with a chalk system to control the corona. According to the data of the Finance Department, there has been an increase of more than 2,796 crores in the head of non-tax revenue of the state government in January 2021 as compared to January 2020. 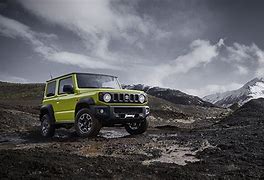 The Jimny has been around long enough in global markets for it to be time for a mid-life nip and tuck, but more importantly this also means that the 5-door Jimny is one step closer to making it to reality. The 5-door Jimny, introduced to India as the Sierra at the 2020 Auto Expo is ear-marked for India. Recent spy-shots reveal a few more details of the India bound SUV.

Like the Jimny Sierra, the 5-door version of the Jimny will be about 300mm longer than the 3-door both in terms of wheelbase and length. The Jimny 5-door will measure in at 3,850mm in length, 1,645mm in width and 1,730mm in height and a wheelbase of 2,550mm. Like the 3-door the Jimny 5-door will have a ground clearance of 210mm and weigh in a 1190kg, 100 more than the 3-door. In the India perspective, this means that the Jimny will come in under the 4-meter mark, although the 1.5 liter petrol motor in the Jimny is likely to negate the benefit of its overall length in terms of taxation.

In global markets the K15B 1.5 litre petrol is rated for 102bhp, although it will be interesting to see if Maruti Suzuki opt for the mild-hybrid powertrain that usually accomanies this motor in India. At present Maruti Suzuki uses this motor with the smart hybrid system in the Vitara Brezza, the S-Cross, the Ciaz as well as the Ertiga. It is likely that the Jimny 5-door will use the same 5-speed manual and 4-speed torque converter that we’ve seen on all the above cars.

Now it is likely that the 5-door Jimny will debut alongside the 3-door Jimny facelift globally with similar cosmetic tweaks. India has already been manufacturing the Jimny 3-door for export markets for some time now, and now we can confirm that the 5-door has been earmarked for a launch in India shortly after the global launch, either by the end of 2021 or early next year.