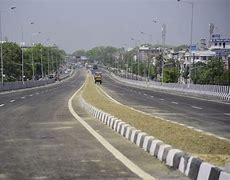 Lucknow: The city will get its second elevated corridor supported on a single pillar technology on Friday. The 2.2km Tedhipulia flyover will be inaugurated by Lucknow MP and defence minister Rajnath Singh and chief minister Yogi Adityanath on April 2. Union transport minister Nitin Gadkari will also be present during the occasion.
Constructed by Uttar Pradesh Public Works Department (UPPWD), this is the second flyover in the city constructed using single pillar technology after Husainganj-Rajendranagar. According to UPPWD officials, the spines and wings for the top deck of the flyover have been installed on single pillars measuring about 3.5 metre wide. As per officials, about 75 pillars have been used for structuring the flyover as compared to 150 pillars which had been used using traditional technique.
Lucknow MP representative Diwakar Tripathi said, “With the use single-pillar technology there will be more space available for the commuters travelling under the flyover especially people commuting towards Kursi Road, Vikasnagar and Gulacheen Mandir. The flyover also stands tall about 8.5 metre from the ground which will also provide ease to heavy vehicles plying below the flyover.”
Construction work of Tedhipulia flyover had started in June 2019 and was slated to be completed within two years of time. Despite the three month lockdown in 2020, the construction work has been completed within the deadline of June 2021 by UPPWD officials.
As per a study conducted by public works department officials, more than 45,000 commuters plying on IIM Lucknow-Munshipulia will be benefitted from the flyover. The flyover is 2.2km long and 21.5 metre wide and has been built at a cost of Rs 96 crore. The flyover will provide hassle free movement for commuters travelling from Jankipuram and Jankipuram extension to Munshipulia, Polytechnic, Khurramnagar, Rahimanagar and Faizabad Road.
Related Topics:Chief Ministerdefense ministerFlyoverLucknowNitin GadkariPWDRajnath SinghUttar PradeshYogi Adityanath
Up Next

Cinema halls, malls, hotels to be closed till next week in Pune amid rising corona cases