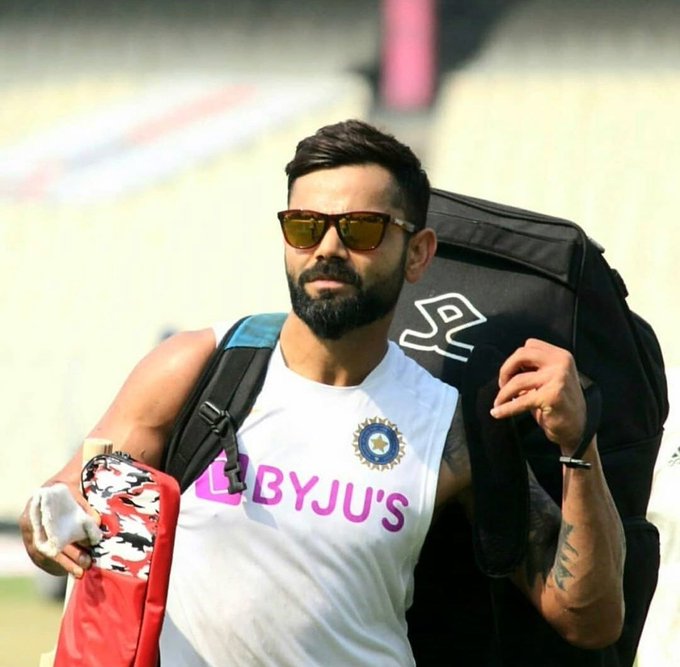 Kolkata: Ahead of their first Day-Night Test against Bangladesh at the Eden Gardens here, India captain Virat Kohli said on Thursday that fielding with the SG pink ball is a very challenging task.

India had a full training session under lights on Wednesday evening where Kohli was seen batting for a long while at the nets during the twilight period, which is said to be the toughest phase for the batters in a pink ball Test.

India went through fielding drills as well, with Rohit Sharma even picking up a minor knock on his hand while catching at slips.

On the eve of the historic occasion, Kohli was asked what challenges the team faced while training.

“Batting is something we were focusing a lot. As batsmen you think of cutting down those errors when you are playing with a different-coloured ball. We were looking to solidify our technique. We are fine with that. But what surprised me were fielding sessions,” said the captain.

Kohli compared the pink ball which has an extra coating of lacquer with a hockey ball in terms of feel and how hard it hits the hand.

“How in the slips the ball hits your hand so hard, it almost felt like a heavy hockey ball or those synthetic balls you used to play with as a kid. It felt like that on the hand and it’s purely because of extra glaze on the ball. It’s much more hardened and felt a little heavy although there won’t be much of a difference in terms of weight. Even the throws took lot more effort than the red ball to reach the keeper,” Kohli explained.

The 31-year old further said that high catching during the day would become very difficult due to visibility of the ball being an issue.

“Dip perception was very difficult when the ball went up in the air. So during the day, high catches will be very difficult. We had to watch the ball straight into our palms more often than not. With red and white balls, you have an idea of how fast the ball is coming down but with the pink ball, if you don’t look at the ball until your palms, it’s gone.

“Fielding session was much more challenging. People are going to be surprised how challenging fielding with this ball can be,” Kohli emphasised.

Among other challenges, the Indian skipper said batters need to have a better idea of where their off-stump is.

“Your idea of off-stump, that’s going to be the most crucial thing because even yesterday when we practised, we felt that the ball could be closer to you but it’s actually not that close to the off-stump. That channel one has to be careful,” said Kohli.

“It will require more concentration, more solid technique, a more compact game compared to the red ball purely because anyway in the longer format, the ball does a lot more than the white ball. Add not having great visibility or the ability to pick that colour makes it even more difficult. So as you can imagine decision-making has to be very precise.

“Even while catching the ball, we felt like how wee feel like when we play with the white ball in the afternoon. You don’t really know how far the ball is and then it hits your hand very quickly. Even in the slips, it was flying very fast. I think the extra glaze on the ball is making it travel faster and it hits the hand very hard.”

He compared the buzz at Eden to how it was during 2016 when India and Pakistan locked horns for a World T20 game.

“Last time we saw a similar buzz at Eden Gardens was when India played Pakistan in the T20 World Cup. There too, dignitaries came and former captains were felicitated in front of sellout crowds. We’re expecting a similar atmosphere here.

“It can be a daunting, intimidating experience for a player too. Imagine the boost our bowlers have standing at the mark with some 80,000 fans cheering for them. I’m expecting very exciting cricket in the first hour because the energy level will be very high. I’m sure the fans would enjoy it. It’s a landmark Test and we’re lucky to be the first Indian team playing it. It’s a great honour.”

PM Modi also said that India is taking a number of “concrete actions” such as making LED lights popular which is saving 38 million tons of Carbon Dioxide Emissions per year and smoke-free kitchens being provided to 80 million households.

“Climate change must be fought not in silos but in an integrated, comprehensive and holistic way. Inspired by our traditional ethos of living in harmony with the environment, and the commitment of my Government, India has adopted low-carbon and climate-resilient development practices,” he said.

PM Modi batted for the International Solar Alliance, pointing out how it is “among the fastest growing International Organizations, with 88 signatories” and has plans to mobilise billions of dollars train thousands of stake-holders, and promote research and development in renewable energy, the ISA will contribute to reducing carbon foot-print”.

The Gurugram headquartered alliance is an India initiated project aimed at using solar energy to reduce dependency on fossil fuel.

He said, “This is the best time for further increasing research and innovation in new and sustainable technologies. We should do so with a spirit of cooperation and collaboration.”