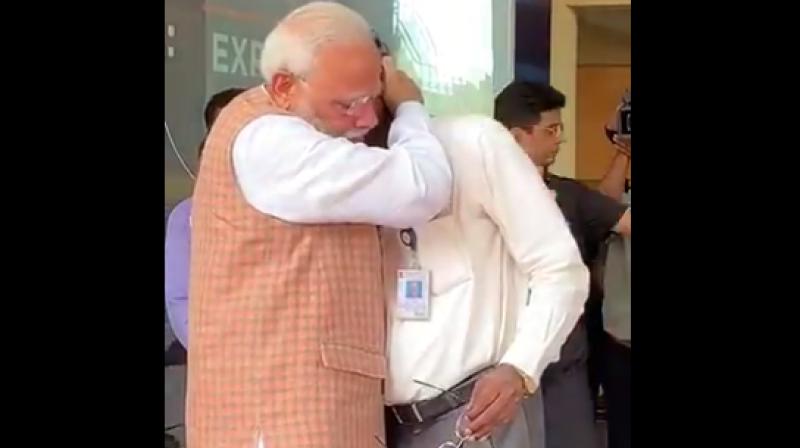 BENGALURU: Prime Minister Narendra Modi consoled an emotional ISRO chief K Sivan this morning, hours after the space agency announced it lost contact with Chandrayaan 2 lander during a historic moon landing attempt.
PM Modi, who flew to Bengaluru on Friday night to watch the planned touchdown of the Vikram lander, hugged the ISRO chief as he broke down and patted him on the back after a speech at the space agency headquarters where he said: “Our determination to touch moon has become even stronger and the best is yet to come.”

In a setback earlier today, contact was lost with the moon lander Vikram minutes before it was due to touch down near the lunar south pole. If the landing was executed successfully as planned, India would have become the fourth country  after the United States, Russia and China  to soft land on the moon.

In his nearly 30-minute long address to the ISRO scientists, PM Modi said “resilience and tenacity are central to India’s ethos”.
“In our glorious history, we have faced moments that may have slowed us but they have never crushed our spirit. We have bounced back again and gone on to do spectacular things. This is why our civilisation stands tall,” he said.

“As important as the final result is the journey and the effort. I can proudly say that the effort was worth it and so was the journey. Our team worked hard, travelled far and those teachings will always remain with us. The learnings from today will make us stronger and better,” PM Modi added.

PM Modi hugged the ISRO chief outside the space centre after the speech. Reacting to the visuals of Mr Sivan breaking down when he was hugged by PM Modi, BJP MP Tejasvi Surya tweeted: “That #ISRO Chief Shivan broke down into tears only shows how invested he was in success of the mission .”

Chandrayaan 2, the first expedition by ISRO to attempt a soft landing on the lunar surface with home-grown technology, is India’s third mission to a celestial body after Chandrayaan 1 mission in 2008 and the Mars Orbiter Mission in 2013.
While the contact with Vikram lander is lost, the orbiter can still take pictures of the moon and send it to the ISRO over the next year.

SC allows Mehbooba Mufti’s daughter to meet her in Kashmir