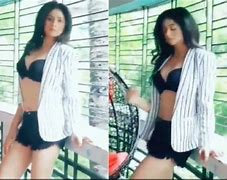 It is a known fact that the relations between Team India’s star pacer Mohammed Shami and his wife Hasin Jahan have been on a rough patch for quite some time. Jahan has levelled serious allegations against Shami and his family. Even though none of the allegations have been proved yet against the pacer or his family, Jahan has since been making headlines.

In one such shocking incident, Jahan has once again done something that has surprised everyone. Jahan shared a picture on Instagram by posing in a saree and even more surprisingly with ‘sindoor’ (vermillion). Her latest post has shocked her 1.25 lakh followers on the photo-video sharing platform and has set the rumor mills running.

She captioned the picture with a message which read as, ‘Sabar Ki ungli pakad kar ham itna chale ke raste hairan reh gaye,’ (roughly translated as holding on the finger of patience, I have come so far ahead that even the road travelled is surprised)

Several users took to the posts comments sections to comment on Jahan’s latest post. Many users appreciated and commented with beautiful synonyms. While some even compared her looks to late Bollywood actor Sridevi.

The relationship between Shami and Jahan is strained, butthe couple are not legally separated yet. They have been living separately and have a daughter. Jahan has been living with the daughter ever since their relationship went south.

The duo tied the knot in April 2014 and a few years later, Jahan accused her husband of cheating and domestic abuse and even shared snapshots of his alleged chats with other women. She has since then also accused him of match-fixing and also claimed that the cricketer’s family have tortured her and wanted to kill her.

Shami, who made his international debut for India in 2013, is currently recovering from the hand injury he suffered during the Australian series. He’s not set his foot on the field since the Adelaide Test.