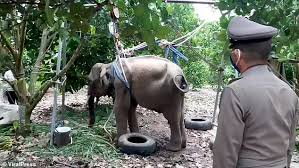 No arrests have been made even a week after a pregnant elephant died in Palakkad district of Kerala after eating a pineapple stuffed with fireworks,on Wednesday. The police have launched an investigation and registered a first information report against unidentified persons.

“We don’t know when the incident happened,” forest officer Aashique Ali U told . “But because of the starvation and shrinking of the elephant, we suspect that it would have happened around 20 days ago.” The elephant’s autopsy results came out on Tuesday.

The wild elephant had left the Silent Valley forest and meandered into a nearby village in search of food. It was here that she ate the fireworks-laced pineapple, which villagers use to protect their fields against wild boars.

According to forest officials, when the elephant ate the fruit, the fireworks exploded in her mouth, badly injuring her tongue and mouth. After walking around the village for days in pain, unable to eat anything, the elephant went back into the wild.

The animal then ventured out into the Velliyar River and stood there with her trunk in the water. Forest officer Mohan Krishnan, who shared the photographs on Facebook, said she must have done so to avoid flies and other insects on her injuries.

“She came out to the village in search of food,” Krishnan wrote on Facebook. “She did not know about the selfish human beings that she was about to witness. She must have thought, they would spare her as she was carrying two lives. She believed everyone. When the pineapple that she ate burst, she must have been in shock not thinking about herself, but the child she was about to give birth to…”

Eventually, forest officials brought out two captive elephants to lure her out of the water. However, attempts to rescue her failed and she died on May 27 around 4 pm, still standing in water. The elephant was taken back inside the forest in a truck, where the forest officials cremated her.