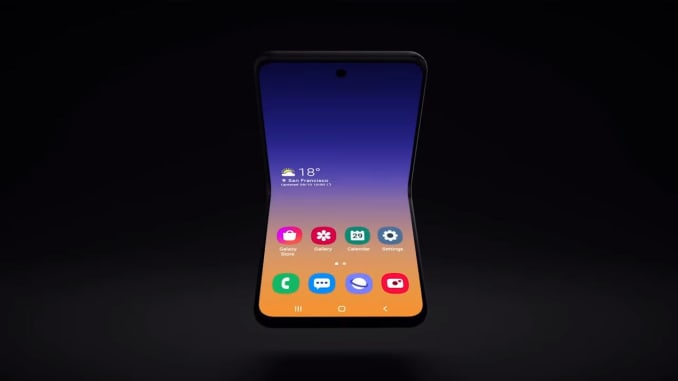 California: The Galaxy Fold went on sale a month ago, but it appears that Samsung has another foldable phone in the works. The company on Tuesday teased a clamshell-style foldable phone during the first day of its annual Samsung Developer Conference (SDC) in San Jose, California.

In a teaser video uploaded on YouTube, Samsung showcased an un-named concept phone that could be a sequel to the Galaxy Fold. Instead of a phone that transforms into a square-shaped tablet, this device reminds of an old-school flip phone with a clamshell design. Interestingly, Motorola is also working on a similar-looking clamshell foldable phone. The phone will be launched at an event in Los Angeles on November 16.

It’s unclear if this new design adopts an external display like the current model, but if it was to fully mimic the flip phones of old, we’d expect to see a small screen on its exterior. If rumours are on the money, the second-gen Fold could sport a teeny 1in secondary display.

Though it looks like a major improvement over Samsung’s current clumsy, bork-prone Galaxy Fold, it’s unclear if the slap-to-shut device will make it to market; the firm said it was merely “exploring” the concept as part of its overall work on foldable devices.

It won’t be the first to market if it does launch, though. Motorola is expected to take the wraps off its reworked Razr, which will be the world’s first foldable clamshell, on 13 November.