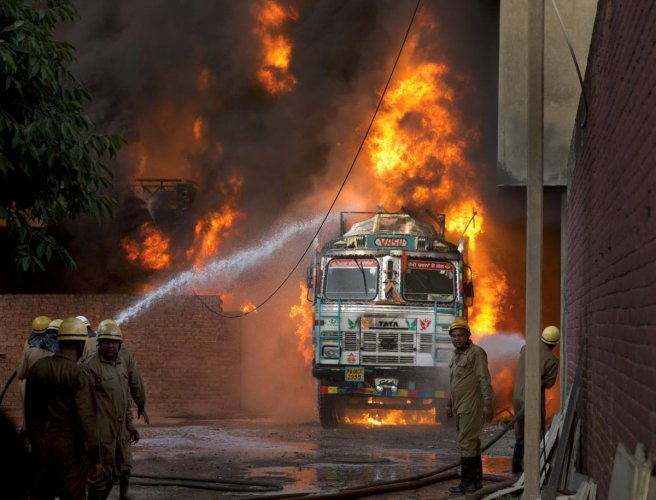 New Delhi: A four Storey building in Zakir Nagar caught fire on 6th August 2019 in South Delhi. People have died and 11 are seriously injured in the mishap. The residential building broke fire at 2am in the night when most of the people were asleep.

The cause of fire is suspected as spark in electric box which caught fire and the fire broke out in the four storeys building which is near Jamia Milia Islamia University. It is a densely populated area and hence it could have harmed a lot of people in the building but fortunately some localities saw the fire and took action as soon as possible.

Around 20 people were rescued on the spot. The local residents called the fire brigade which came on time. In the panic situation some people jumped of the building due to which they got seriously injured. In the rescue operation two of the fire fighters also got injured. The injured have been taken to the nearby hospital.

Dr. Mala, the Chief Medical Officer of Holy Family Hospital, where the injured people were taken for treatment, said, “Five patients are in the intensive care unit (ICU), some are in the ward and one is in the pediatric ICU. Everything is under control. We have specialists to look after the patients”.

Around seven cars and 19 motorcycles were destroyed in the fire. Chief Minister of Delhi Arvind Kejriwal tweeted that he was very sorry for the incident, he is looking into the incident and his government will provide all the help possible.