Vijender, who won his first six professional bouts outside India, will fight for the first time in front of his home fans in New Delhi.

The 43-year-old former India batsman, besides wishing the 2008 Olympic Games bronze medallist boxer, also said he is sure the 30-year-old Delhi lad will make the nation proud by winning the bout.

“Wishing all the very best to @boxervijender. You will surely make our nation proud. #RingKaKing,” Tendulkar tweeted on Saturday.

Vijender will face an opponent who has an experience of 30 bouts, of which he has won 23, out of which two were by knock-outs.

The Beijing Olympics bronze medallist has won all his six fights so far, but Hope has more experience and is a better calibre fighter than Vijender’s previous opponents.

The 34-year-old has been a professional boxer for 12 years and has been involved in 30 fights over that period with a record of 23-7. That, along with the fact that he is a left-hander — a distinct advantage in most sports — makes the Australian of Welsh origin a dangerous opponent. 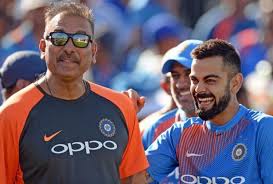 Wishes have been pouring in for Ravi Shastri who turned 58 on Wednesday. Shastri, unlike the last few years, has been spending his special day at his home in Alibaug away from competitive cricket which remains suspended due to the Covid-19 pandemic. 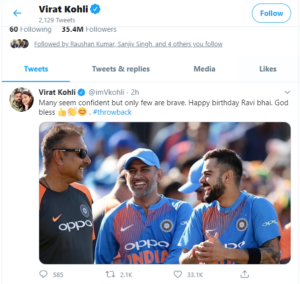 Earlier in the day, The Board of Control for Cricket in India (BCCI) took to Twitter to post a photo tribute to wish Ravi Shastri. “Here’s wishing #Team India Head Coach @RaviShastriOfc a very happy birthday,” BCCI wrote. 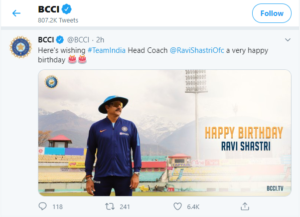 Although he started his career as a left arm spin bowler, only to transform into a batting all-rounder. In a career spanning over 12 years, Shastri scored 3,830 runs in Test matches and claimed 151 wickets.

His major achievement as a player came when he helped Team India clinch Benson & Hedges World Championship of Cricket in 1985. Shastri finished with fifties in the last three matches of the tournament and forged a deadly partnership with Sivaramakrishnan. Both claimed 18 wickets between them in five matches.