The latest trend to fascinate the netizens is the Couple Challenge, wherein people are participating to celebrate their relationships online through various social media platforms.

However, this seemingly “cute” new challenge has prompted authorities across the country to issue warnings against sharing pictures over the web after receiving a number of cyber crime complaints in this regard.

Here’s what you need to know.

Reportedly, more than 35,000 pictures along with this hashtag have been shared on Instagram alone.

The trend has also sparked countless memes, with people using photo-editing software to insert their favorite celebrities in their own pictures.

However, this internet challenge has drawn the attention of the cops after they received a number of complaints over it.

The police said that many of these pictures are being morphed, edited or used for pornography, deep fake, or other cyber crimes.

In a recent Twitter post, the Pune Police warned users to “think twice” before sharing pictures with their partners on social media. 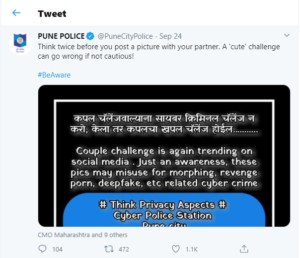 The cops came up with a warning after they received a number of complaints from people who had suffered harassment. While some said their pictures and personal information were misused, others claimed their images were morphed and then uploaded on pornographic websites.

Deep fakes are computer-generated images that may be used to superimpose a person’s face on to an existing video or photograph.

UPSA drafts proposal for re-opening of schools in UP, Schools in Lucknow could open soon.