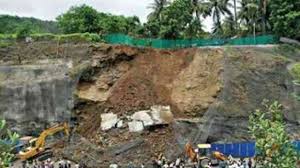 About 20 people have died in the landslide in Assam today. The deceased are mainly reported from three different districts of Barak Valley region of South Assam. This area has been raining heavily for the last few days. Northeast is most affected by the problem of landslides.

Allegedly, seven out of 20 people were from Joypur in Catcher, seven from Catcher-Hailakandi, and six from Karimganj. In Joypur, Cachar, a landslide incident occurred on Tuesday morning when a landslide buried several houses, killing seven people, including women and children. The deceased have been identified as Tajimuddin Laskar, Alia Begum, Allam Uddin, Arif Uddin, Amuna Begum, Somuna Begum and Rahim Uddin. They are all from the same family.

It has been suspected that more bodies have been buried under the morgue. In Halakandi’s Bhoot Bazaar, seven people lost their lives in landslides. Whereas, a family of six died in the same manner in Karimganj.