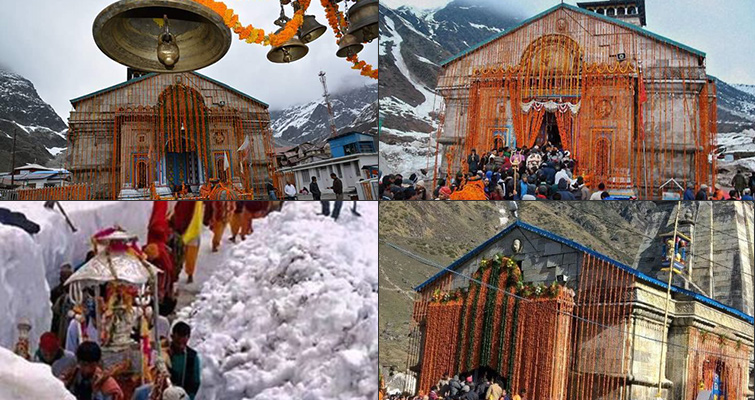 The doors of the world-famous Lord Kedarnath Dham were opened at 6:10 am this morning after law and worship. Shortage of pilgrims and local people was seen here on the occasion of opening of the valve. This will be the first time due to the Korana crisis when there was no tote of devotees in Baba’s court when the doors opened.

Around 20 people, including the temple’s chief priest, were present when the gates to the mountain shrine for Lord Shiva, decorated with marigold flowers, were opened at 6.10 am. None of the usual crowds were seen at the flower-decked temple gates blazing against snow.Shiva Shankar Linga, the chief priest of Kedarnath Dham, carried on the tradition of opening the doors. While 20 employees of Panchgai, including BD Singh, as Devsthanam board representative, came here when the doors opened. Apart from this, around 15 people of police and administration were present here. This is the first time in the history of Kedarnath Yatra when the temple complex remained completely empty on the occasion of the opening of the temple. This time thousands of devotees missed the echoes of the bomb blasts. It has never been seen in the past that when the doors of Baba Kedar are opening and there is some lack of devotees.

The “darshan” or sighting of the deity and prayers will not be allowed because of the COVID-19 restrictions, the priests said.

Many symptoms of corona besides cold-fever, don’t ignore