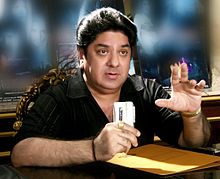 Mumbai:  Shyam Ramsay, one of the seven Ramsay Brothers known for cult horror films such as ‘Puraani Haveli’ and ‘Tahkhana’, died in a hospital on Wednesday, his family said. He was 67. Shyam died of pneumonia at a city-based hospital.

Shyam Ramsay was considered the brain behind the group, he directed films such as ‘Darwaza’, ‘Purana Mandir’ and ‘Veerana’. He was also responsible for ‘The Zee horror show’, ‘Saturday Suspense’, ‘X Zone’ and ‘Nagin’.

The origins of the horror empire set up by the band of brothers can be traced back to a modest radio shop in Karachi in undivided India.

The shop’s proprietor, Fatehchand U Ramsinghani, had relocated to Mumbai after Partition and decided to get into the business of film production.

The Ramsay Brothers, for the longest time ruled the horror genre in Indian cinema with low-budget movies in the 1970s and 1980s. The films were widely popular for their unique mix of horror and erotica.

The last rites will be held at Vile Parle crematorium on Wednesday. Shyam Ramsay is survived by two daughters Sasha and Namrata.