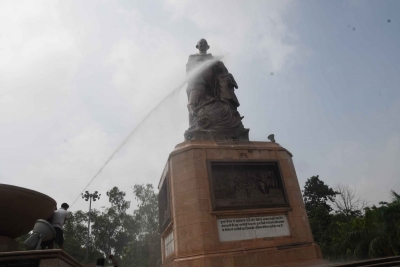 Jaipur, April 4 (IANS) A statue of Mahatma Gandhi was vandalised in Nathdwara town of Rajasthan, following which three young men were arrested, police said on Wednesday.

Police identified the accused as Ankit Gehlot, 25, Kuldeep Gehlot, 22, and Arvind Gehlot, 24. They will be produced in a court on Thursday, a police official said.

The head of the statue, installed by the Nathdwara municipality in Valmiki Basti in the town, was found missing on Tuesday, following which a case was registered under the Prevention of Damage to Public Property Act. Police had rounded up a few suspects for questioning.

Assistant Sub-Inspector Shuklal Pancholi told IANS that the all three were students and had an altercation earlier with their peers from a particular community.

The police official claimed that the accused hatched a plan to damage the statue and then put the blame on members of a particular community in the wake of protests by the Dalits against a Supreme Court order on law pertaining to Scheduled Castes and Tribes.

However, police said, CCTVs installed in nearby areas recorded their crime and exposed their plan. They spilled the beans during questioning.

Earlier, Nathdwara Circle Incharge Mahipal Singh had said that police was scanning CCTV footage from surrounding areas and looking for other clues.

Congress state unit Vice President Archana Sharma condemned the act of vandalism. “It seems the confidence of miscreants has reached an all-time high across the country and so there has been a spate of such demolitions,” she said.

Opposition adamant despite our reaching out: Goel