Islamabad:  The Lahore High Court has allowed private channels to show Indian movies as per their terms of agreements with Pakistan Electronic Media Regulatory Authority (Pemra). The court on Monday granted permission in the light of Pemra’s 2002 ordinance that television channels were allowed to run Indian films, The News International reported. Justice Syed Mansoor Ali Shah issued the order after Leo Communication and others challenged the ban on the broadcast of Indian content on TVs.

The petitioner argued the permission would remain subject to terms and conditions of the licence under the Pemra Ordinance in 2002. It said the channels should be allowed to broadcast Indian dramas/plays as they fall within the category of “entertainment”. However, the Pemra contested the argument and sought time to establish that “entertainment” did not include Indian dramas and plays.

It said the channels were allowed to run Indian movies as per terms of their licence agreements. The court has set March 2 for further hearing. Leo Communication had filed the petition assailing a circular issued by the Pemra on October 19 last year for being ultra vires of the authority’s rules and the constitution as well. The petitioner company said the government was indulging in selective patriotism as Indian movies were allowed to be screened across the country but not on televisions. 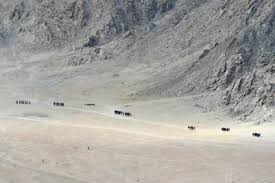 China’s army has removed tents from the designated area of Galvan Valley and has taken back the troops. Government sources said on Monday that this is the first indication of disengagement of soldiers from this area. Disengagement of Chinese troops began according to the agreement between the Corps Commander Levels on both sides. Sources said that the Chinese army was seen removing the tents and structures at Petroling Point 14. Let me tell you that on Friday, Prime Minister Modi visited Leh. This process of disengagement has started for the first time after PM’s visit.
According to sources, a similar movement of Chinese Army vehicles also appeared in Gogra Haat Spring Area. According to sources, the Chinese Army has withdrawn tents, vehicles and soldiers 1-2 kilometers from the places where disengagement was agreed upon in the Commander Level talks. Chinese heavily armored vehicles still exist in the Depth areas in the Galvan River region. The Indian Army is vigilantly monitoring the situation.
For the past seven weeks, there has been a situation of deadlock between the Indian and Chinese military in many places of East Ladakh. Meanwhile, on 20 June, 20 Indian soldiers were killed in a violent clash between Indian Army and Chinese Army in Galvan Valley. In this skirmish, the Chinese Army was once severely damaged, but China has not yet made public its details. India is in favor of maintaining status quo in all areas of eastern Ladakh. So that peace and harmony can be restored in the area. Let me tell you, several rounds of diplomatic and military talks are going on between India and China to reduce tension in this area.
Prime Minister Narendra Modi visited the Leh Surprise on Friday amidst the conflict between India and China. During this, he addressed the army personnel in Neemu, a forward location along the border. Apart from this, going to the army hospital in Ladakh, knowing the condition of the wounded soldiers and encouraged them. There is a clear indication from the Prime Minister’s visit that the Indian government is fully standing with its soldiers. Neemu is situated amidst inaccessible hills at an altitude of about 11,000 feet.