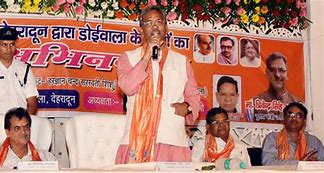 Just a year ahead of Uttarakhand Assembly elections, Chief Minister Trivendra Singh Rawat is likely to tender his resignation on Tuesday amid a political crisis in the BJP state unit.

Sources said Rawat would step down as CM when he would meet the Governor at 4 pm.

The development comes a day after Trivendra Singh Rawat met central BJP leaders in Delhi. There has been speculation that BJP was mulling political changes in the state after several ministers and MLAs have expressed apprehensions over the working style of Rawat.

Rawat was named the chief ministerial candidate by the BJP after it stormed to power in 2017, winning 57 of 70 seats in the state assembly.

A section of state leaders are of the view that the party’s electoral prospects under him may not be very bright. Top sources in the party said at least 10 BJP MLAs, including four ministers, are camping in Delhi.

As per sources, some ministers have given an ultimatum to Raman Singh and Gautam that they would resign if CM Rawat was not removed.

To placate the dissenting MLAs, the party leadership might go for an expansion of the Rawat Cabinet. After the 2017 elections, Rawat had inducted seven Cabinet and two junior ministers with independent charge. As per rules, the state can have a maximum of 12 ministers, including the CM. A Cabinet post fell vacant after minister Prakash Pant passed away last year in May.