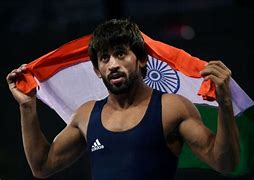 Just 30 seconds were left on the clock and India’s star wrestler Bajrang Punia was trailing 0-2 in his 65kg final against Mongolia’s Tulga Tumur Ochir at the Matteo Pellicone Ranking Series tournament in Rome.

For the better part of 5 minutes, 30 seconds, Bajrang was concentrating on defending – especially his legs. There were attacking moves, but few and far between. With time running out, Bajrang went for the broke in the last 30 seconds. A lightning move that caught Ochir off-balance resulted in a takedown and handed Bajrang two points, levelling the score at 2-2. For the final few seconds, Bajrang defended well and the match ended in a tie. But since the last scoring point came from Bajrang, he was declared the winner on ‘criteria’.

With the win, Bajrang regained the world No. 1 ranking in the 65kg category. The 27-year-old was placed second in the world rankings before the event.

“I am happy to get some tournament competition under my belt. Wrestling is a contact sport; therefore during these times, I am feeling lucky to be able to compete,” Bajrang told TOI before embarking on the flight back to India.

“Overall, the tournament was very competitive. I had to work hard to win the matches. The Mongolian wrestler, who was my opponent in the final, has also qualified for the Tokyo Olympics. It was a tough match and I got to know the areas I need work on.”

Bajrang had crushed former cadet world champion Selim Kozan of Turkey 7-0 in his opening encounter. He faced stiff competition from USA’s Joseph Christopher McKenna in the semifinal but prevailed 6-3 in the end. In all three matches, Bajrang’s “improved” leg defence came to the fore. “During the lockdown phase as well as after it, I have worked hard on my leg defence. Also, my training at the Michigan University in USA late last year has really helped me,” he said.

Bajrang will now be back in the national camp but wants to train abroad before the Asian Wrestling Championships, scheduled to be held in Almaty, Kazakhstan from April 9 to 11.