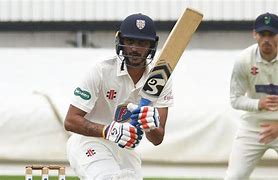 Viewers of the third Test between India and England in Ahmedabad would have noticed that Rishabh Pant frequently called Axar Patel ‘Wasim Bhai’ from behind the stumps. The left-arm spinner, who was the Man of the Match for his 11 wickets in India’s two-day 10-wicket win, explained why.

“Rishabh Pant says that when I bowl a fast arm-ball, it comes in quickly like Wasim bhai. He calls me Wasim bhai. Ajinkya Rahane kept that name, now Rishabh has caught on,” Axar said in the post match presentation.

Axar has got three five wicket hauls in two Tests. Was he finding Test cricket too easy?

“It seems easy when it (five-for) happens, otherwise it feels very difficult. Now that it’s happening, I just want to continue my form – not thinking it’s easy or difficult.

“Now that I am taking wickets, no one is making fun of my batting. But I hope to contribute with the bat more too, I’m being positive.”

Axar explained that his strength is his consistency.

“My strengths are that my bowling is wicket-to-wicket. Don’t give batsmen room. Want them to induce mistakes and get wickets, making things tough for them to score runs.

“In today’s day and age, batsmen have a mindset of sweeping or playing over the top after one or two maiden overs, so that’s what my mindset to try and bowl dot balls.

“Things are going fine, hope it continues. Hope to get similar pitches, so that my form continues too.”

Meanwhile, spinner R Ashwin reached his milestone of 400 Test wickets. He too was rich in praise of Axar.

“It feels amazing actually to reach 400 Test wickets. The entire stadium saw it on the big screen, stood up and clapped for me. Pleasant it happened in the winning cause. When we got all out for 145, thought we might not have enough lead and the game was in the balance,” he said at the post match presentation. But Axar Patel bowled beautifully in the third innings to pull things back.”

India way ahead of China in Covid-19 vaccine diplomacy battle