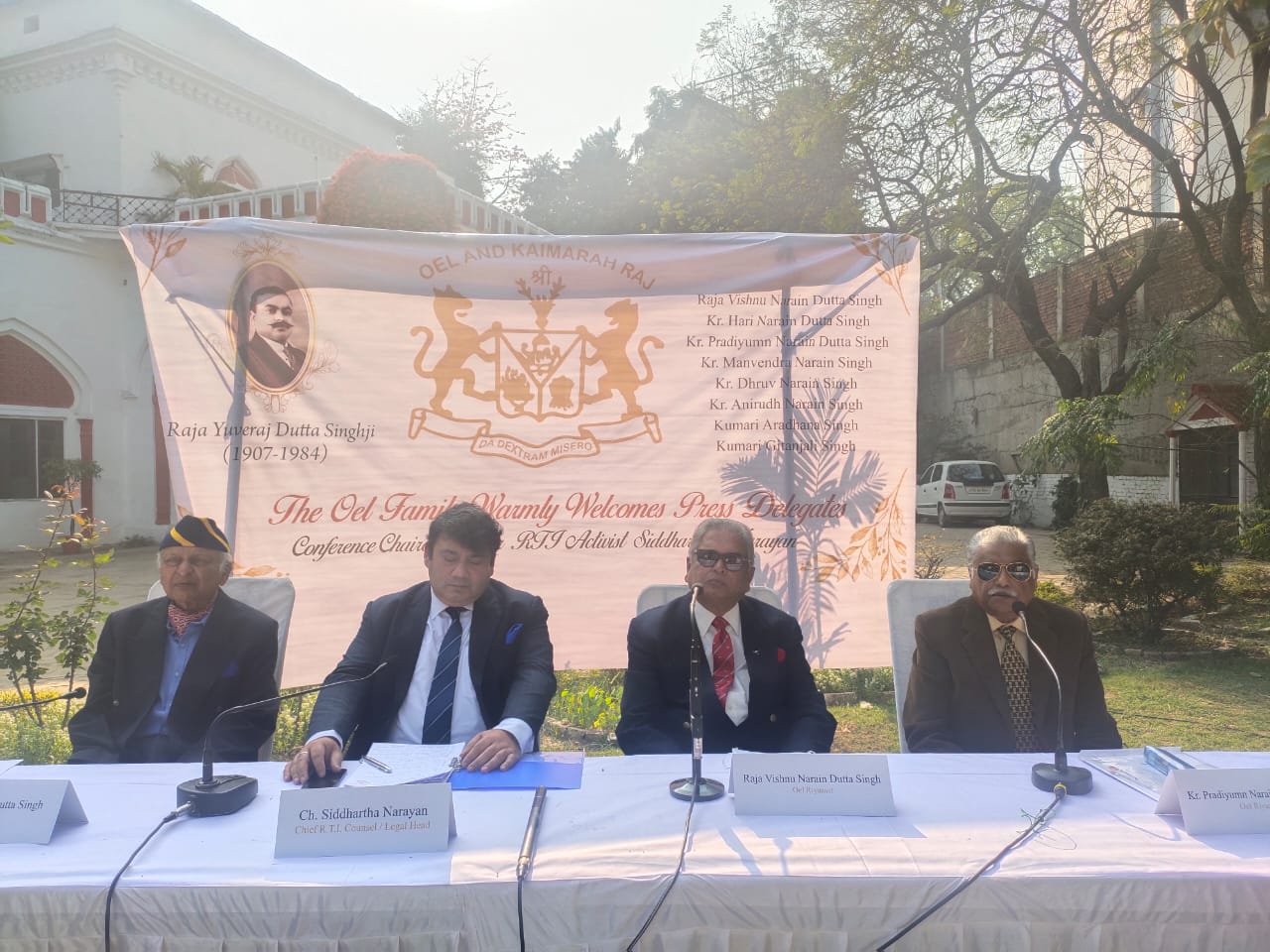 RTI king Siddharta Narayan handed over a grand palace to its rightful owners after a ten months of  legal fight. The palace was owned by Late. Raja Yuveraj Singh ji of Oel and it was on lease for the past 93 years.

In the August of 1928 Raja Yuveraj Singh ji of Oel could have never imagined that 93 years later his palace would obtain cult status in the annuls of Information Activism. It was way back in British undivided India that the Late king gave his house on a 30 year lease to the then British Government, It was mutually decided that the building and its lawns would be maintained to perfection and a floating sum would be given on a monthly basis to the Royal family as rent.

After India got its independence the same mansion was given another 30 year extension. In the spring of 1984 Yuveraj Singhji died leaving behind a rich legacy of educational Institutions and other employment opportunities for his people . After his death, the palace was again due for its lease renewal but this time certain elements intruded and tried to fudge up the original Khasra number and other revenue related documents. This created a lot of trouble for the grandsons of the Late Yuveraj.

In the August of 2019 Kr. Pradiyumn Narain Dutta Singhji one of the grandsons of Yuveraj Singhji approached on perusal of the material evidence available in hand Siddhartha called for 2 year time line to trace the Mother documents of the palace and to conduct a thorough inquiry into the fudging up of the Khasra and gatah details. A total of four RTIs were filed with the DM, Commissioner, Revenue and Finance Department of the State All of them were ironically transffered to the DM of Kheri – Who was by now the tenent of the palace In question. After much paperwork On the 27th of March,2020 A letter under RTI stated that the original deed is in the Sub- Registrar office in Sitapur. As it was almost now a given that the deed was not lost a string of 5 RTIs were filed on the Sub Registrar Office, Sitapur and finally It was on the 21st of October, 2020 that The original Lease Deed dating back to British regime was traced. This gave the Oel palace its rightful owner.

Of information activism has reached the pinnacle of success and restructured RTI through sheer hardwork, grace and integrity. A former Information Commissioner foundly calls him “The Ram Jethmalani of RTI” & states that Siddhartha has Fought cases for those for whom Justice was a far cry His prominent cases include Shaktimaan the Uttrakhand police horse, Sharda murder the Agra Church attack Amongst others The only activist who has a methuselah-esque list of the poor & needy as his clients. On the other hand if one wants to hire his services – A tip – If you can tell the brands he wears You can afford his fees.

Ecstatic with the developments and post careful scrutiny of the document The Royal house of Oel Deeply thanked the entire Kheri Magistery for their kindness Speaking to reporters during a press conference,  proud Raja Vishnu Narain DuttaSinghji said, “Very satisfied and felt very proud both as a grandson, son and father at the same time He prayed that the legacy left behind by his grandfather be passed on to the kids of the Royal house”

His son Manvendra Narain Singhji while talking to reporters from his Ocean facing Kowloon Bay office in Hong Kong said that he will show case this achievement to the International community in New York and in Washington.”

Meanwhile, The elegant and graceful young YuvraniAradhanaSinghji made a commitment that she would dedicate a large part of her life towards promoting gender equality and women empowerment. she added that she has started looking at the latest GOs and how best she can contribute to the Mission Shakti program of the Govt of UP.

The Evergreen Kr. HariNarain Singhji looks forwards to a leisurely nap after a long time and gave a hearfelt thank you to Sub Registrar, Sitapur Capt., S.P.Dubey and Finally Grandson Kr.Pradiyumn Narain Singhji who started this movement in the August of 2019 feels that the ancestry of the family has to be preserved and this would be a great step for the future for fulfilling the porpose. He also gave full credit and expressed thanks to his counsel and Star RTI activist, Siddhartha Narayan for all his efforts to get to this achievement Siddhartha – The RTI Super -Star enters the `100 crore RTI club in 10 months with an investment of just `10.