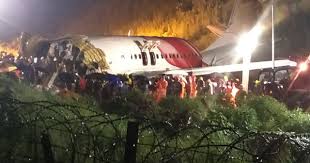 The plane was carrying 191 passengers – including 10 infants, two pilots and five crew – when it slipped off the runway in Karipur, Kerala, injuring 123 people.

Images circulating online appeared to show the aircraft split into two parts, laying in a valley.

One of the pilots is among the dead according to Abdul Karim, a senior Kerala state police officer, who added that at least 15 of the injured were in critical condition.

The jet was on a repatriation flight carrying Indian citizens back to the country, officials said. Regular commercial flights have been halted in India because of the corona virus outbreak.

Passengers have since been evacuated from the jet, which had been flying from Dubai to Kozhikode in southern India. Four passengers are thought to be trapped in the wreckage.

Prime Minister Narendra Modi wrote on Twitter that he had spoken to Kerala’s chief minister following the incident, adding: “Pained by the plane accident in Kozhikode. My thoughts are with those who lost their loved ones. May the injured recover at the earliest.

“Authorities are at the spot, providing all assistance to the affected.”Amitabh Kant, who heads the government’s planning commission, said the runway is on a hilltop with deep gorges on either side, making it difficult to land.“The incident happened because of heavy rains and poor visibility. This is truly devastating,” he told

The jet is the latest in a string of aircraft to have slipped off runways in India, prompting concerns over aviation safety standards in the country.