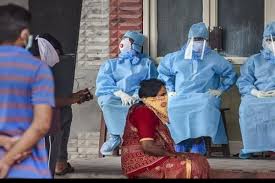 As Bengaluru sees a sharp spike in corona virus cases, one of the fallout that has emerged is of people in need of ambulances having to wait for hours for one to arrive. We spoke to a woman, in her 50s, who was called by the authorities and was told  that she was COVID-19 positive.  She had been tested at a private hospital where she had gone for treatment as she had been feeling unwell.

The person who called told her to wait for an ambulance which would come and take her to a government hospital. While she got the call at 1 PM, the ambulance came at 9 PM.

For nearly eight hours, she had to sit outside her house, waiting for the ambulance, as her husband and son were quarantined inside.

We spoke to her during her long wait. “I had gone to a hospital and came back home yesterday evening. I was resting comfortably at home. I had no cold, cough, fever or headache. I washed clothes and cooked. Then at 1 PM, I got a call from Kagalipura hospital saying I was (COVID-19) positive. They asked me to pack my clothes and be ready for the ambulance. I have been sitting, waiting since then,” the woman told a news channel over the phone.

She got another call after the first, asking her to have her lunch. But the ambulance finally only came at 9 PM after an eight hour wait. In her tension, she broke down on the phone while speaking to us, saying she was frightened. She is now in a government hospital in Bengaluru, where she says she is being looked after well.

Residents have been asked to call 108 for an ambulance. The sending of that ambulance and the allotment of hospitals beds is now centralized. It is a huge challenge for the ambulance team as Bengaluru is a sprawling city and the ambulance needs to be sanitized well between each trip.

Karnataka Chief Minister BS Yediyurappa has appealed to the people of Bengaluru not to panic. He said 450 ambulances have been added to the fleet.

The hope for all who need them – that ambulances will be able to respond faster to those in physical and emotional distress during this pandemic.

Karnataka, and Bengaluru in particular, have seen a rapid spike in cases in the last few days. Bengaluru Urban remains the district with the highest number of cases. Bengaluru and other towns and cities of Karnataka observed a total shutdown on Sunday. The state has logged 23,474 corona virus cases, including 372 deaths.