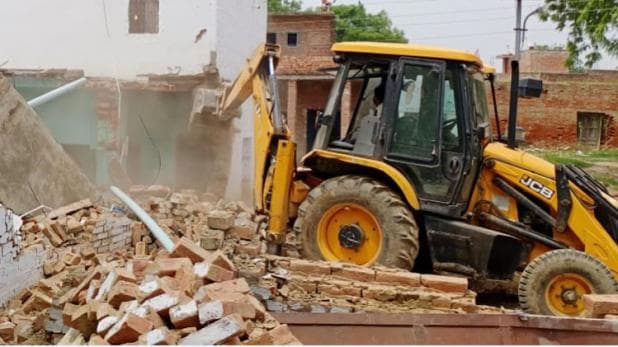 In Kanpur, Uttar Pradesh, 100 teams of police are engaged in the search for History Sheeter Vikas Dubey, who killed eight policemen. It is feared that Vikas has fled to Nepal after carrying out the incident. Meanwhile, Vikas Dubey’s house was demolished by the district administration.

During this time the cars parked there were also crushed. The administration demolished his house with the same JCB he used to block the way for the policemen. The police and administration teams had reached Bikaru village from Saturday morning.

Late Thursday, the notorious criminal Vikas Dubey, a resident of Bikeru village of Chaubepur police station area of ​​Kanpur, was attacked by a police team who had captured his village, in which eight police personnel, including a magistrate, a police station were killed. Five policemen, a homeguard and a civilian are injured in the encounter.

History Sheeter Vikas Dubey, who murdered eight police personnel in Kanpur, is absconding. It is being told that Vikas Dubey has fled to Nepal after committing the crime at night.

In the midst of all this, a question is arising in everyone’s mind that how did Vikas Dubey have already got a glimpse of the arrival of the police team, because the way Vikas executed the incident with complete planning, it clearly shows that There was complete information beforehand.

STF also suspects that a police informer had already informed Vikas Dubey. In order to convert this suspicion into confidence, the police has released call details of the development in which numbers of some policemen have also been found.

Police investigation has also revealed that a sub-inspector of Choubepur police station had informed Vikas Dubey about the arrival of police. He was the last man during the encounter and fled from there as soon as the firing took place. At present, the police suspects a passer-by, soldier and home guard.

Police is questioning them on the basis of the call details of the three. Explain that STF has been constituted to investigate the matter.

The UP police has also announced a reward of 50 thousand rupees to the one who gave the clue of Vikas Dubey. Vikas Dubey also owned AK-47s and advanced weapons.

CM Yogi Adityanath has directed that along with monitoring of all the dams of the state, the availability of necessary repair material should also be ensured, so that it can be prevented before any damage occurs.