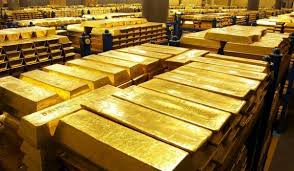 China is at the center of the discovery of what may be one of the biggest gold counterfeiting scandal in recent history. According to a report in Zero Hedge, not only does it involve China, but it emerges from Wuhan.

PICC P&C declined to comment to Caixin Media, a Chinese media group, on the matter but said the case is in judicial procedure. A source from PICC P&C told Caixin that the claim procedure should be initiated by Kingold as the insured party rather than financial institutions as beneficiaries. Kingold hasn’t made a claim, the Caixin source said.

In total, Kingold pledge tens of thousands of kilograms of gold to no less than 14 creditors amounting to just under 20 billion yuan.

As for the gold, several billion in gold bars never existed and yet resulted in a cascade of subsequent cash flow events allowing tens of billions in funds to be released, “benefiting” not only Kingold‘s founder Jia, but China’s broader economy.

Kingold is certainly not the only Chinese company engaging in such blatant fraud, and the consequences are clear: once Chinese creditors or insurance companies start testing the “collateral” they have received in exchange for tens of billions in loans and discover, to their “amazement”, that instead of gold they are proud owners of tungsten or copper, they have two choices: reveal the fraud, risking tremendous adverse consequences and/or prison time, or quietly buy up all the gold needed to literally fill the void from years of gold counterfeiting.

At the center of the fraud is Wuhan Kingold Jewelry Inc., a company which as the name implies was founded and operates out of Wuhan, and which says it is a “A Company with a Golden future.”

In retrospect, it probably meant “copper” future, because as a an expose by Caixin has found, more than a dozen Chinese financial institutions, mainly trust companies (i.e., shadow banks) loaned 20 billion yuan ($2.8 billion) over the past five years to Wuhan Kingold Jewelry with pure gold as collateral and insurance policies to cover any losses. There was just one problem: the “gold” turned out to be gold-plated copper.

Kingold — whose name was probably stolen from Kinross Gold, one of the world’s largest gold miners — is the largest privately owned gold processor in central China’s Hubei province. Its shares are listed on the Nasdaq stock exchange in New York . The company is led by Chairman Jia Zhihong, an intimidating ex-military man who is the controlling shareholder.

Well, apparently everything as at least some of 83 tons of gold bars used as loan collateral turned out to be nothing but gilded copper. That has left lenders holding the bag for the remaining 16 billion yuan of loans outstanding against the bogus bars. And as Caixin adds, the loans were covered by 30 billion yuan of property insurance policies issued by state insurer PICC Property and Casualty and various other smaller insurers, the report in Zero Hedge said.

The fake gold came to light in February when Dongguan Trust (one of those infamous Chinese shadow banks) set out to liquidate Kingold collateral to cover defaulted debts. As the report continues, in late 2019 Kingold failed to repay investors in several trust products. To its shock, Dongguan Trust said it discovered that the gleaming gold bars were actually gilded copper alloy.

The news sent shock waves through Kingold’s creditors. China Minsheng Trust — another shadow banking company and one of Kingold’s largest creditors — obtained a court order to test collateral before Kingold’s debts came due. On May 22, the test result returned saying the bars sealed in Minsheng Trust’s coffers are also copper alloy.

And with authorities investigating how this happened, Kingold chief Jia flatly denies that anything is wrong with the collateral his company put up.

As Caxin notes, the Kingold counterfeiting case echoes China’s largest gold-loan fraud case, unfolding since 2016 in the northwest Shaanxi province and neighboring Hunan, where regulators found adulterated gold bars in 19 lenders’ coffers backing 19 billion yuan of loans, or about USD 2.5 billion. In that case, a lender seeking to melt gold collateral found black tungsten plate in the middle of the bars.

In total, Kingold pledge tens of thousands of kilograms of gold to no less than 14 creditors amounting to just under 20 billion yuan, the Zero Hedge report said.

Probe for Fake appointments of teachers in Uttar Pradesh by STF.

Do not keep these things in your purse, you may have to bear heavy losses

PM Modi on Sunday launched a financing facility of Rs 1 lakh crore under the Agriculture Infrastructure Fund via video conferencing. The Prime Minister also released the sixth installment of funds of Rs 17,000 crore to 8.5 crore farmers under the PM-KISAN scheme. “This will help in creating better storage, modern cold storage chain in villages and many employment opportunities will be created in the village,” PM Modi said while launching the facility. “Along with this, I am very satisfied with the transfer of Rs 17,000 crores as PM Kisan Samman Nidhi to the account of 8.5 crore farmer families. The satisfaction is that the goal of this scheme is being achieved,” Modi added. He highlighted that farmers have received Rs 75,000 crore through this scheme in the last year and a half directly in their bank accounts. Of this, Rs 22,000 crore was transferred during the lockdown.

The mission of one country-one mandi for which work was going on for the last 7 years, is now being completed, PM Modi said adding that through the first e-National Agriculture Market (e-NAM), a technology-based system was created, and by making law, the farmer was freed from the market and market tax. “Now the farmer has many options.” Farmers would be able to deal with their produce in his field or directly from the warehouse where they would be able to deal with whoever pays the e-NAM to the traders and institutions associated with e-NAM.

PM Modi stressed that the Agriculture Infrastructure Fund will help farmers make modern facilities of storage in their villages as well. “This modern infrastructure will go a long way in setting up agro-based industries. Under the self-reliant India campaign, a big plan has been made to bring the famous products in every district to the market of the country and the world.”

To ensure self-reliance among farmers as part of the Atmanirbhar Bharat campaign, Modi said that there will be a situation where agricultural industries’ food-based products in the village will go to the city while other industrial goods from the cities will come to the village. Herein, the larger share will be of large groups of small farmers (Farmers Producer Association). “Therefore, for the last 7 years, we have campaigned to build a large network of FPO-Farmers Producer Group,” Prime Minister added.

Modi also highlighted the support provided to agri startups as well. He noted that around 350 startups associated with food processing, artificial intelligence, internet of things, manufacturing of smart farming equipment, and renewable energy are being supported.

The announcement comes two days after the government on Friday had launched India’s first ‘Kisan rail’ between Devlali in Maharashtra and Danapur in Bihar to meet the needs of small farmers and traders for transporting perishable supplies to distant places. The new service will help realize the government’s goal of doubling farmers’ income by 2022, according to Railway Ministry.

“This will open the way for more income from less land, many new opportunities for employment and self-employment will open,” Modi added while recognizing the role played by farmers for supplying essential goods and services during the lockdown. The government too, ensured that farmers have a record purchase of their produce. “As a result, around Rs 27,000 crore more than the last time has reached farmers.”

Rs 1 lakh crore is to be sanctioned in partnership with multiple lenders even as 11 of the 12 Public Sector Banks have already signed MOUs with the Department of Agriculture Cooperation and Farmers Welfare (DAC&FW), PMO had said in a statement on Saturday. Under the scheme, 3 per cent interest subvention and credit guarantee of up to Rs 2 crore will be given to the beneficiaries to enhance the viability of these projects. Farmers, PACS, marketing cooperative societies, FPOs, SHGs, Joint Liability Groups (JLG), multipurpose cooperative societies, agripreneurs, startups, and central/state agency or local body sponsored public-private partnership projects would be overall beneficiaries. PM-KISAN scheme was launched on December 1, 2018, to offer a direct cash benefit of over Rs 75,000 Crore to more than 9.9 crore farmers.