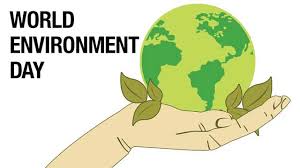 Every year June 5 is celebrated as World Environment day. But this year’s event is totally different from the previous years due to corona virus pandemic.

The very first World Environment Day took place in 1973, inspired by the United Nations Conference on the Human Environment that took place the year before starting on June 5th. Each year the United Nations pick a theme and a host city where environmental topics can be discussed , followed by different kinds of exhibits and displays to promote environmental awareness, in many ways very similar to Earth Day. This year (2015)  World Earth Day discussions will be hosted by Italy, and the theme is Seven Billion Dreams. One Planet. Consumer with Care, environmentalists, academics and scientists will come together to bring new ideas to the table concerning the environment.

Almost everywhere in the world, people are confined to the four walls of their homes due to lockdown prompted by COVID-19 virus. The usual activity of planting saplings may not be done in India and other parts of the world as gatherings are not allowed due to fear of corona virus.

This year’s World Environment Day celebrations are subdued and confined to online seminars and activities.

Instead of going to the field to plant saplings, countries are conduct online activities to promote environmental protection and awareness.

Lot’s of people are take part in online programmes organised by various organisations including NGOs. This year’s hosts for the World Environment Day are Germany and Colombia.

This year’s theme is biodiversity– a concern that is both urgent and existential. “Recent events, from bush fires in Brazil, the United States, and Australia to locust infestations across East Africa – and now, a global disease pandemic – demonstrate the interdependence of humans and the webs of life, in which they exist,” the UN said in a statement.