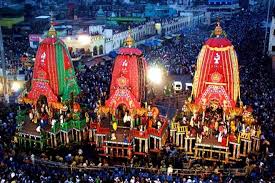 The Shree Jagannath Temple Managing Committee (SJTMC) on Saturday recommended to the Odisha government to conduct the annual Rathayatra of Lord Jagannath in Puri sans devotees in view of the corona virus pandemic.

Rathyatra is scheduled to be held on June 23 in Puri.Keeping the SJTMC’s recommendation in mind, the Odisha government has asked the Indian Railways not to run trains to Puri.

The SJTMC decision in this regard was taken at a meeting of the SJTMC which was chaired by Gajapati Maharaja Dibyasingha Deb, traditionally considered the prime servitor of the deity.

The committee also recommended that the state government arrange live telecast of the annual festival so that lakhs of devotees across the globe can witness it on TV.

Deb said most of the events of the grand festival should be live telecast keeping in view their sentiments.

We have recommended holding the Rathayatra without the presence of devotees on the Grand Road in front of the 12th century temple in Puri. It is for the state government to take a final decision on conducting the Rathayatra, Deb told reporters after the meeting held through video conferencing.

The devotees, he said, should not congregate in Puri for Rathayatra keeping in mind the pandemic. If we allow devotees to participate in the festival this year like in the previous years, it will not be possible to maintain the social distancing norm which is essential to stop the spread of corona virus.

Deb said the SJTMC also suggested to the state government to keep the Grand Road on which the chariots of the dieties will roll on Rathayatra free from crowds. Even the residents of Puri town should not be present on that during the festival.

Replying a question, he said the SJTMC has decided not to allow devotees either to Shree Jagannath Temple or Gundicha Temple, the destiantion of the chariots, at Puri on Rathayatra even if the the central and state governments lift the lockdown after two days.

This is because it will not be practically possible to control the crowd if we open the doors of the temples.

Therefore, the SJTMC has decided to prohibit entry of devotees into the shrine at least till the completion of Rathayatra,” he said.

According religious scriptures and the puranas, the Lords bathing rituals (Snana Jatra), car festival (Rathayatra Jatra) and other rituals must be observed as per the tradition. The Rathayatra festival can be observed without the presence of devotees. But we will observe the rituals as they are being performed since ages, Deb said.

The Snana yatra rituals on June five will be conducted by a limited number of servitorss inside the premises of the temple in the absence of devotees, he said.

Accordingly, the Purushottam Express starting on June 1, 2020, will originate from Bhubaneswar instead of Puri.

Similar will be the case with Sealdah-Puri Duronto Express, the official said.