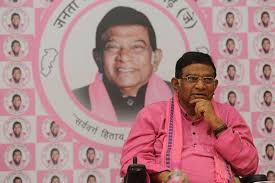 Former chief minister of Chhattisgarh Ajit Jogi dead at 74 on Friday. He is survived by his wife Renu Jogi, MLA from Kota, and son Amit Jogi.

Ajit Johi suffered a cardiac arrest earlier this month and has been in a Raipur hospital since then.The announcement of his demise was made by his son Amit Jogi who took to Twitter to make the announcement. 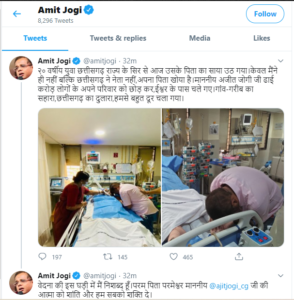 Ajit Pramod Kumar Jogi (born 29 April 1946) was an Indian politician, who served as the first chief minister of the state of Chhattisgarh, India. He was a member of the Indian National Congress (INC) political party.

Ajit Kumar Jogi was the first Chief Minister of the state of Chhattisgarh. He served as the CM of the state between November 2000 and December 2003. He has been a member of both the Houses of the Parliament apart from being elected to the state legislature. In 2016, Ajit Jogi and his son Amit Jogi were expelled from INC for anti-party activities and sabotaging by-polls in Antagarh, Chhattisgarh. His son Amit was expelled from Congress party for 6 years.

He has also authored books titled, “The Role of District Collector”, and “Administration of Peripheral Areas.” He’s a gold medalist in Mechanical Engineer from Maulana Azad College of Technology, Bhopal. Ajit Jogi has served as the District Collector of Indore from 1981-85.

2018 Ajit jogi announced that he will contest the assembly election from Rajnandgaon and Marvahi seats. This means he will directly challenge Dr. Raman Singh.

2009 Jogi served as a Lok Sabha member Chhattisgarh’s Mahasamund constituency after getting elected in 2009 Lok Sabha Elections. Jogi, however, failed to retain his seat in the 2014 LS polls and lost to BJP’s Chandu Lal Sahu by 133 votes.

2008 Elected as a Member of the Legislative Assembly of Chhattisgarh, representing the Marwahi constituency.

2004 He was elected as MP in the 14th Lok Sabha for Mahasamund, Chhattisgarh.

1974 Ajit Jogi selected for the Indian Police Service and Indian Administrative Service. Jogi served as set a record of the longest serving Collector/District Magistrate for over 12 years at Sidhi, Shahdol, Raipur and Indore districts of Madhya Pradesh from 1974 to 1986.

1967 He also worked briefly as a lecturer (1967-68) at the Government Engineering College, Raipur (Chhattisgarh).

No of Sons 1 Amit Jogi