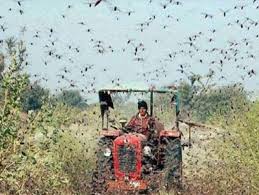 As predicted by the United Nations, India is witnessing armies of locusts swarming across the country – the worst such attack in 26 years. The insects are destroying crops even as the country has been brought to a standstill amid the corona virus pandemic.

WHAT IS A LOCUST SWARM?

First, let’s understand what locust swarms are and how they damage crops. Locusts are insects that travel in large swarms that can travel up to 150 kilometres in a day depending on the wind speed. Locust swarms devastate crops and cause major agricultural damage, which can lead to famine and starvation.

Locusts devour leaves, flowers, fruits, seeds, bark and growing points, and also destroy plants by their sheer weight as they descend on them in massive numbers.

A small swarm of the desert locust eats on an average as much food in one day as about 10 elephants, 25 camels, or 2,500 people.

A swarm the size of Delhi may consume the same amount of food in one day as every inhabitant in Rajasthan or Madhya Pradesh in one day.

LOCUST ATTACKS ARE NOT NEW

Although it may seem like the year 2020 is filled with unprecedented catastrophes, locust attacks are not new. The only reason many on the internet seem to be surprised by the recent locust swarms is that they have come to India in this proportion after 27 years.

Locust attacks have been mentioned in almost all ancient texts, right from wall paintings on ancients Egyptians pyramids to the Bible and Koran. Ancient Greeks talked about locust attacks and so did Sanskrit poems dating back to 747 BC.

The problem that troubled pharaohs, King Ashoka and King Solomon is still a menace in today’s age. Within recorded history, India has witnessed several locust plagues and upsurges since 1812.

The government does not consider locust upsurges during 1978 and 1993 and several in-between as major outbreaks. But as per the government records, 190 locusts swarms had attacked an area of at least 3,10,000 hectares in Jaiselmer, Barmer, Bhuj and Jalore districts of Rajasthan in 1993. Large areas in these districts again had to be treated with chemicals to get rid of locust swarms in 1997 and 2005.

Most of the attacks by locust swarms in India since 1993 have been localized to Rajasthan. But this time, favorable weather conditions have facilitated locusts’ travel from Rajasthan to Gujarat, Madhya Pradesh, Uttar Pradesh and even Maharashtra.

Reports of crop damages have been pouring in from these states as farmers try and get rid of locusts by smoking them out, scaring them away by making loud noises or spraying chemicals.

India has a specialized Locust Warning Organisation, headquartered in Jodhpur. The center is responsible for timely monitoring and planning for locust eradication and providing assistance to state governments in controlling invasions.

The state and central machinery, including the LWO, are actively trying to get rid of the locusts invading India through Pakistan, but their efforts may not be enough.

WORST YET TO COME

The locust swarms currently plaguing Indians crops bred and matured in Iran and Pakistan’s Balochistan. But larger swarms that bred in Horn of Africa and parts of the Arabian Peninsula, due to abnormal weather activities caused by two cyclones in 2018, are also likely to move towards India soon.

The United Nation’s food and agriculture organisation (FAO) has warned India of an impending locust invasion. As per the FAO, the locust infestation is likely to get severe by next month. The desert locust invasion is expected to move from East Africa to India and Pakistan next month and could be accompanied by other swarms.

The FAO’s Senior Locust Forecasting Officer Keith Cressman said: “Everybody knows we’re facing one of the worst desert locust situations that we’ve probably had in a number of decades”.

WHY YOU SHOULD CARE

Locust swarms eat food, food that farmers are growing for humans. If locust attacks of this proportion continue unabated, the insects will wipe out lakhs of tones of food grains and vegetables meant for human consumption.

Apart from a possible lack of food grains and vegetables, locust attacks on farms will also plunge India into fresh economic trouble.

Plagued by an economic slowdown and Covid-19 lockdown, the Indian economy is already on the edge. While experts hope that things will improve after a vaccine for the novel corona virus comes into the market, an agrarian crisis due to locust attack will throw the government’s plans off-balance.

More relief packages will have to be announced and more money will have to be taken out of government coffers, less and less revenue will be generated and food inflation will skyrocket as supply will fall below demand.

In short, even if you are sharing the locust videos from the safety of your air conditioned living room, you should be worried that it may cost you much more to put food on the table in the coming days.