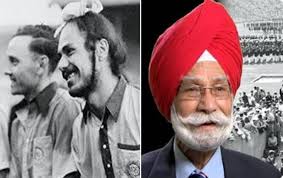 Three-time Olympic champion and one of the greatest ever hockey players, Balbir Singh Dosanjh passed away after prolonged illness on Monday morning.

Known as Balbir Singh Sr to all, the 95-year old had been hospitalized on May 8 after complaining of high fever and breathing problems. He suffered three cardiac arrests but had been stable since May 13. However, his condition worsened after fresh blood clot was detected in his brain and pneumonia patches in his lungs on May 18. He had been semi-comatose and on ventilator support since then.

“He died at around 6:30 this morning,” affirmed Abhijit Singh, Director Fortis Hospital, Mohali. Balbir Singh lived with his daughter Sushbir Bhomia and grandson Kabir in Chandigarh. Kabir confirmed the news.

Balbir Singh had been keeping unwell for the last few years, requiring repeated hospitalization. “I met him last in February, along with Ajitpal Singh, in Chandigarh. He was weak, both with his recent illness and age, but that smile of his, which always had so much love and meaning, was intact. A relationship going back more than 40 years has come to an end,” an emotional Ashok Kumar, member of the 1975 World Cup when Balbir Singh was manager, said.

“I will always remember him as a soft-spoken person who never ever raised his voice. For someone from Punjab, and Punjab Police, a center-forward, there was never a trace of aggression in his personality. And at a time when sports in general in India was often about where you came from, his first concern was always the team and country,” Ashok added.

India’s lone individual gold medalist shooter Abhinav Bindra was among the first to condole the death. “Saddened to hear of the demise of one of India’s most celebrated Olympians, Balbir Singh Sr. Athletes and role models such as him come very rarely, and it was an honor to know him, and I hope his example will continue to inspire athletes from around the world,” Bindra wrote.

Hockey India and the Indian Olympic Association too expressed their grief, as did members of the current Indian team. “I will cherish the simplicity, humility and pride that he brought to bear in his own charming way. His ready wit and willingness to share his vast knowledge were stand out features. Indeed, Balbir Singh ji leaves behind a rich legacy that cuts across all sport and physical boundaries,” IOA president Narinder Batra said.

A key member of the Indian side at the Olympics from 1948-1956, Balbir Singh was also the captain and is considered one of the best center-forwards of all times. He was also the manager of the only World Cup winning Indian side in 1975, the first sportsperson to be awarded the Padma Shri (1957) and the lone Indian and hockey player to be included in the IOC’s ‘Olympic Icons”, a select group of 16 all-time Olympic greats honored during the London Olympics.

A state funeral will be held for Balbir Singh Sr in his hometown Chandigarh at 5:30 pm on Monday at the sector 25 electric crematorium.

The pace of corona virus is increasing in the country, Number of patients 1 lakh 45 thousand 380