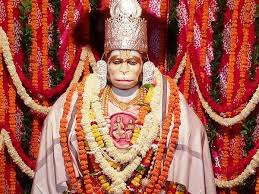 The festival that is peculiar to Lucknow and held on every Tuesday of the Hindu month of Jyeshtha — celebrating Lord Hanuman, has ponly grown bigger with each passing year. The state government even allows a designated local holiday on this festival.

The first Tuesday of the month of Jyeshtha falls on May 12 when the lockdown will be in force.

Ravi Krishan, a sweet seller outside the Aliganj Hanuman temple, said, “I do not know whether this is an ominous sign but it is unthinkable that ”Bada Mangal” will not be celebrated this year. The government should allow the temples to open on the occasion so that devotees can offer prayers.”

A senior official, who did not wish to be named, said: “There is a possibility that the Hanuman temple may be allowed to open on Bada Mangal but social distancing will be strictly enforced if it happens.”

The ”Bada Mangal” has an interesting story to it.

According to historians, the Hanuman temple in Aliganj was constructed by Nawab Saadat Ali Khan in 1798 when his mother Aliya Begum”s prayers were reportedly answered and the Nawab was blessed with a son.

Aliya Begum insisted on building the temple and the Nawab complied.

Nawab Wajid Ali Shah, the last nawab of Oudh, continued the tradition by holding community feasts for Hanuman devotees, who believe that their prayers will be answered by the Lord on ”Bada Mangal”.

The Aliganj temple has a star and a crescent on the dome and the ”Bada Mangal” festival is a perfect example of Hindu-Muslim unity.

The over 9,000 big and small Hanuman temples in Lucknow open their doors at the stroke of midnight and devotees continue to offer prayers for almost 24 hours. So great is the devotion that even the policemen deployed inside the temples, stand barefoot and do not wear belts and leather accessories.

Those who come with special prayers, crawl their way to the temple, clad in red loincloths, and braving the searing May heat.

The local people help these devotees complete their journey by sprinkling water on the roads and offering ”sherbet”.

”Bada Mangal” is observed as a local holiday and the entire state capital gets into a festive mood.

In fact, there are over 50,000 stalls that are set up on every ”Bada Mangal” in Lucknow.

From the initial jaggery and grams that were offered to devotees, the ”prasad” later became ”poori sabzi” allowing the devotees a wholesome meal.

Over the years, the menu has also evolved and you can now savor burgers, chow-mein , sherbet, juices, ice creams and other delicacies at these stalls.

Though the main Hanuman temple is in Aliganj area, the festival is celebrated all over the state capital, with different colors and smells pervading the air.

Tiny fairs are held all over where one can buy curios, artifacts, jewelry, toys, snacks, beverages and games for children.

PM Modi Conference : In meeting, CMs are being consulted on the battle against Corona