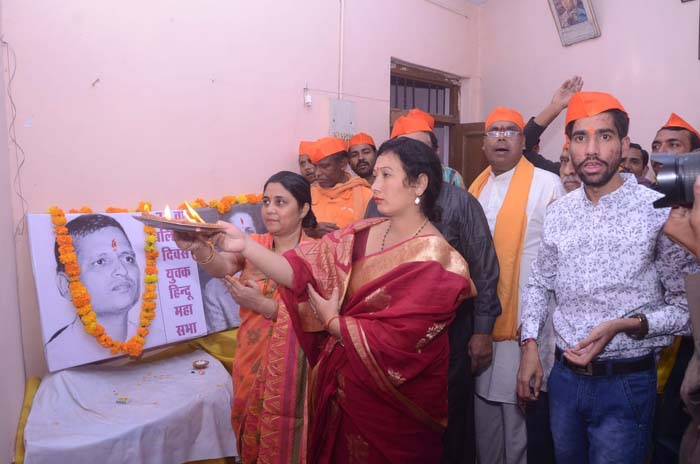 Gwalior: The Hindu Mahasabha on Tuesday sought to reignite the Nathuram Godse bushfire by inviting Netaji Subhas Chandra Boses “grand niece” Rajyashree Choudhury to glorify him and run down the Father of the Nation at Gwalior.

She has also likened Mahatma Gandhi’s role in the freedom struggle to “Bhishma” of the epic Mahabharat who is blamed by some for condoning the immoral behaviour of ‘Kauravas’.

Choudhary and Mahasabha national spokesman Nisha Katoch arrived at the outfit’s office after offering prayers at Rani Laxmibai’s statue on the occasion of her birth anniversary. Nathuram Godse, who was hanged for the assassination of Mahatma Gandhi, was also worshiped by freedom fighter ‘Netaji’ Subhas Chandra Bose’s grand niece in Gwalior on Tuesday.

She also claimed that many leaders of the Congress had wanted Sardar Vallabhbhai Patel to lead the country after Independence, but Gandhiji “silenced” everyone to “favour” Jawaharlal Nehru, who went on to become the first prime minister.

On November 15, mahasabha members had performed ‘aarti’ of Godse and Narayan Apte, a co-conspirator who too was hanged in the Gandhi assassination case, at their office in Gwalior. They even demanded inclusion of Godse’s court statements in school curriculum.

Congress leader Pankaj Chaturvedi said leaders of outfits hailing Godse are publicity-greedy, have not credibility and had no role in the freedom movement and hence, their comments do not merit a response.