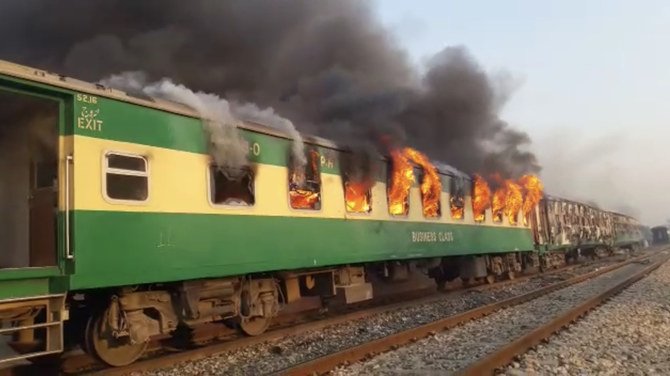 Islamabad: At least 65 people have died after a train travelling through Punjab province in Pakistan caught fire, trapping many on board.

The fire started when a gas cylinder used for cooking food exploded, local media reported, and the blaze then spread across three carriages.

The fire destroyed three of the train’s carriages near the town of Rahim Yar Khan in the south of Punjab province.

“Two cooking stoves blew up. They were cooking, they had (cooking) oil which added fuel to fire,” Minister for Railways Sheikh Rashid Ahmed told Geo television.  “Most deaths occurred from people jumping off the train,” he added.

Mazari said the train was the Tezgam, one of Pakistan’s oldest and most popular train services, which runs between the garrison city of Rawalpindi, adjacent to Islamabad, and the southern port city of Karachi.

Prime Minister Imran Khan has expressed deep grief and sorrow over the loss of precious lives and has ordered that the injured be provided top of the line medical care.

Deeply saddened by the terrible tragedy of the Tezgam train. My condolences go to the victims' families & prayers for the speedy recovery of the injured. I have ordered an immediate inquiry to be completed on an urgent basis.

Train accidents are common in Pakistan, where the railways have seen decades of decline due to corruption, mismanagement and lack of investment.

In July, at least 23 people were killed in the same district when a passenger train coming from the eastern city of Lahore rammed into a goods train that had stopped at a crossing.

Jammu and Kashmir no more a state from today, officially split into 2 Union Territories