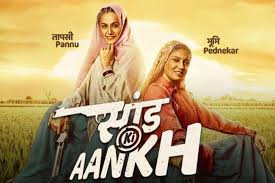 Lucknow: Saand Ki Aankh is all set to release this Friday. The Uttar Pradesh government in a cabinet meeting held on Tuesday decided to exempt the bollywood movie ‘Saand Ki Aankh’ from GST in the state. The movie based on women empowerment and sports promotion has already been exempted from taxes in Rajasthan.

The film stars two impressive actresses, Taapsee Pannu and Bhumi Pednekar. The film is based on the life of two real-life sharpshooters, Chandro and Prakashi Tomar, who took up shooting at the age of 60. The pair then went on to earn several accolades for the country. winning hundreds of medals each. Taapsee and Bhumi will be essaying the role of  the shooter ‘Dadis’ in the film, who inspired young girls from their village to earn respect.

The movie based on women empowerment and sports promotion has already been exempted from taxes in Rajasthan. Popularly known as ‘Shooter Dadi’ Chandro Tomar learnt the art of shooting at the age of 60 years and went on to become one of the best shooters of the country.

The movie ‘Saand Ki Aankh’ is set for release on 25th October and is being directed by Tushar Hiranandani.

Congress to hold protests from November 5 to 15

Uber ties up with Delhi Metro