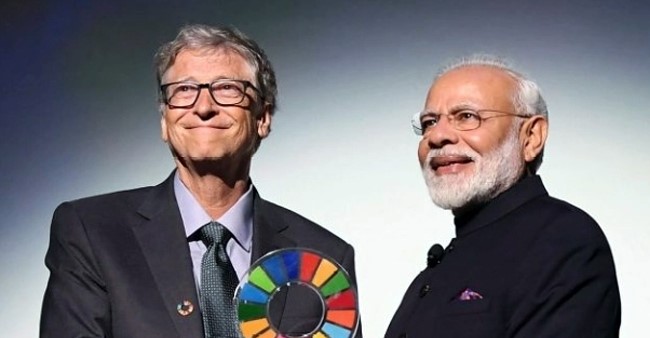 USA: Prime Minister Narendra Modi Wednesday received the Global Goalkeeper Award from the Bill and Melinda Gates Foundation for his government’s initiatives on sanitation, including the Swachh Bharat Abhiyan.

Goalkeepers is Bill and Melinda Gates Gates foundation’s campaign to accelerate progress towards sustainable development goals. PM Modi was chosen for the award, one of the most prestigious awards in the development sector, for the Swachh Bharat Abhiyan, which was among the first programmes announced by him in his first stint as prime minister.

He dedicated the award to those Indians who transformed the Swachh Bharat campaign into a “people’s movement” and accorded topmost priority to cleanliness in their day-to-day lives.

“I dedicate the Global Goalkeeper Award, conferred by the @gatesfoundation, to the 130 crore people of India and the collective endeavours of our nation to improve cleanliness,” Modi said in a tweet. He added that it made him the most happy that India’s successes in sanitation helped women and children the most.

I dedicate the Global Goalkeeper Award, conferred by the @gatesfoundation, to the 130 crore people of India and the collective endeavours of our nation to improve cleanliness.

It makes me most happy that India’s successes in sanitation have helped women and children the most. pic.twitter.com/Va4QKMY3tv

No such campaign was seen or heard about in any other country in the recent past. It might have been launched by our government, but people took control of it,” Modi said. As a result, over 11 crore toilets were built in the country in the last five years, which was a record, he said.

The Swachh Bharat Abhiyan was launched by the Modi government during its first term on October 2, 2014.