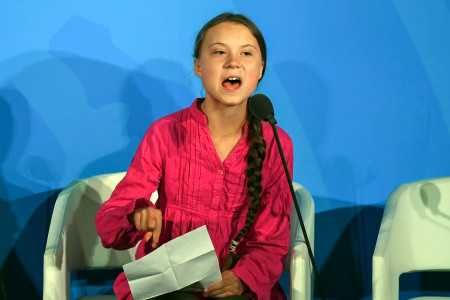 Climate activist Greta Thunberg spoke at the United Nations Climate Action Summit on Monday, where she scolded world leaders for failing to address climate change. The 16-year-old has become one of the leading voices for a generation confronting the consequences of a warmer planet.

Swedish climate activist Greta Thunberg and 15 other children filed a complaint with the United Nations Monday alleging that five of the world’s major economies have violated their human rights by not taking adequate action to stop the unfolding climate crisis.

“You have stolen my dreams and my childhood with your empty words — and yet, I’m one of the lucky ones,” Thunberg said Monday.

”People are suffering, people are dying, entire ecosystems are collapsing. We are in the beginning of a mass extinction and all you can talk about is money and fairytales of eternal economic growth.” Watch Greta Thunberg speak at the UN Monday morning. https://t.co/Akkxm9sXdr pic.twitter.com/ahHKlhbYaE

“People are suffering. People are dying and dying ecosystems are collapsing. We are in the beginning of a mass extinction, and all you can talk about is the money and fairy tales of eternal economic growth,” she said, as she fought back tears. “How dare you! For more than 30 years the science has been crystal clear. How dare you continue to look away and come here saying that you’re doing enough when the politics and solutions needed are still nowhere in sight.”

Thunberg recently celebrated the one-year anniversary of the start of her climate change movement. Last August, she began striking by herself outside the Swedish parliament, and soon, students around the world began walking out of school, demanding action from their governments. She’s been called “the voice of the planet,” and has even been nominated for the Nobel Peace Prize.

NASA claims Venus may have been habitable for billions of years