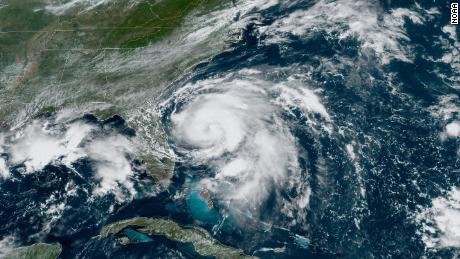 Miami: Hurricane Humberto continues to strengthen on its trek toward Bermuda, reaching Category 3 strength on Tuesday as maximum sustained winds hit 185 km/h. While the forecast track has drifted north, lowering the risk for a landfall on Bermuda, the island remains in harm’s way as the storm approaches.

A hurricane warning is in effect for Bermuda as Humberto becomes better organized with a better-defined eye. The U.S. National Hurricane Center (NHC) expects the storm to remain a powerful hurricane through Thursday.

Though the centre of the storm is expected to pass just north of Bermuda, Humberto is a large hurricane with an expansive wind field, and that means Bermuda will likely see near-hurricane-force conditions sometime late on Wednesday, even with a near miss.

The storm is moving east-northeast at about 12 mph with maximum sustained winds of 115 mph and higher gusts, the center said. It’s expected to continue moving northeast through Friday, with the eye expected to past “just to the northwest and north of Bermuda Wednesday night.”

“Some fluctuations in intensity are likely during the next day or so, but Humberto should remain a powerful hurricane through Thursday,” the center added. “A steady weakening trend should begin later on Thursday.”

While Humberto is moving away from the United States, the storm’s “life-threatening” swells will still impact the southeastern coast of the country from Central Florida to North Carolina as well as the northeastern Bahamas, the NHC said.