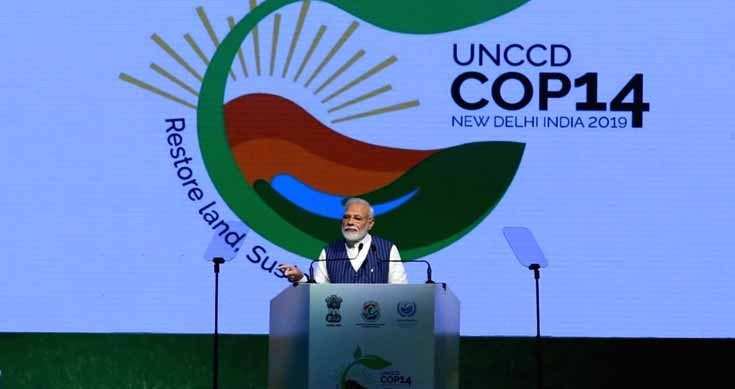 New Delhi:: Prime Minister Narendra Modi on Monday said that it was now time for the rest of the world to follow India and “say good-bye” to single-use plastic. He made the remark at the Conference of Parties (COP14) to United Nations Convention to Combat Desertification in Greater Noida in Uttar Pradesh.

“Climate and environment impact both biodiversity and land,” the prime minister added. “It is widely accepted that the world is facing the negative impact of climate change. Climate change is also leading to land degradation of various kinds be it due to rise in sea levels and wave action, erratic rainfall and storms, and sand storms caused by hot temperatures.”

During his Independence Day speech on August 15, the prime minister had asked Indians to eliminate single-use plastic and use cloth and jute bags instead. He urged authorities across the country to make arrangements for collecting plastic in the “first strong step” in the direction on October 2, Mahatma Gandhi’s birthday. The Indian Railways has decided to ban single-use plastic in its trains from October 2. Modi took up the matter again in his “Mann Ki Baat” address to the country last month. During the programme, he called for a “new mass movement” against single-use plastic.

On Monday, Modi added that India will be happy to organise initiatives for South-South cooperation in addressing climate change problems, biodiversity and land degradation. “It would make you happy that India has been able to increase its tree cover,” he said. “Between 2015 and 2017, India’s tree and forest cover has increased by 0.8 million hectares.” Modi added that the central government has released funds worth nearly $6 billion (approximately Rs 43,000 crore) to state governments in India for the purpose of development of forest lands.