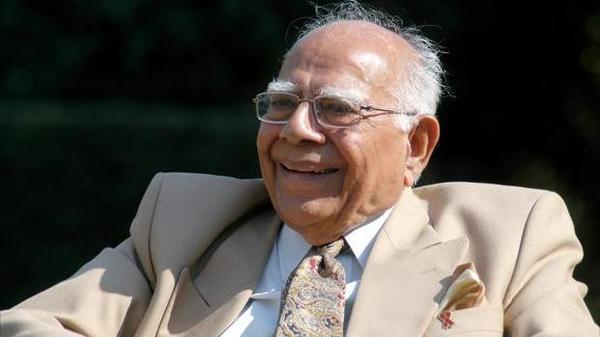 New Delhi: Ram Jethmalani, veteran criminal lawyer and former Union Law Minister, passed away on Sunday morning at his residence in New Delhi. He was 95. According to reports, the lawyer had been on round-the-clock medical support over the past one week. His family told news agency PTI that he had not been keeping well for a few months. His son Mahesh Jethmalani added that his last rites will be conducted at the Lodhi road crematorium in New Delhi on Sunday evening.

Though he was primarily known as a criminal lawyer – one of the highest paid in India – Jethmalani appeared in many high profile cases. Among the noted ones are defending the accused in the Rajiv Gandhi case in the Madras High Court, defending the death sentence given to Afzal Guru – convicted in the attack on Parliament in 2001 – and representing Manu Sharma, the prime accused in the Jessica Lal murder case.

The senior lawyer had also dabbled in politics, and won the general elections in 1980 on a BJP ticket from Mumbai. He was elected as a Member of Parliament in the 6th and 7th Lok Sabha. In 1996, he became the Union Minister of Law, Justice and Company Affairs in Atal Bihari Vajpayee’s government. He held the portfolio during Vajpayee’s second term as well, after which he was then asked to resign. Between June 1999 and July 2000, he served as the Minister of Law and Justice before which, from March 1998 to June 1999, he was the Minister of Urban Development. Later, he went on to unsuccessfully contest against Vajpayee from the Lucknow parliamentary constituency in 2004. In 2010, the BJP gave him Rajya Sabha ticket.

One of the best aspects of Shri Ram Jethmalani Ji was the ability to speak his mind. And, he did so without any fear. During the dark days of the Emergency, his fortitude and fight for public liberties will be remembered. Helping the needy was an integral part of his persona.

Ram Jethmalani ji’s passing away is a irreparable loss to the entire legal community. He will always be remembered for his vast knowledge on legal affairs. My condolences to the bereaved family. Om Shanti Shanti Shanti.

Extremely saddened at the passing away of legendary lawyer Ram Jethmalani ji. An institution in himself, he shaped criminal law in post-independence India. His void would never be filled and his name will be written in golden words in legal history.