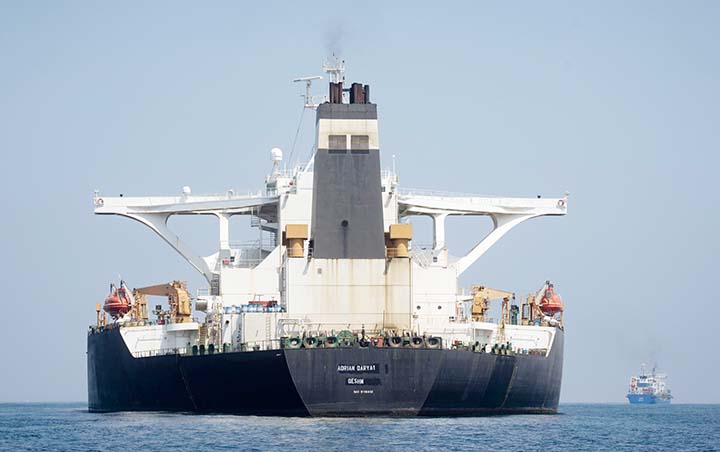 DUBAI:  An Iranian oil tanker pursued by the U.S. on Friday again listed its destination as Turkey but the Turkish foreign minister added to the confusion by saying the vessel is headed to Lebanon — statements that were promptly denied in Beirut.

The flurry of contradictory statements further muddies the waters for the Adrian Darya 1, formerly known as the Grace 1, and obscures where its 2.1 million barrels of oil will ultimately go.

The tanker has taken center stage recently amid a crisis roiling the Persian Gulf and escalating tensions between Washington and Tehran after President Donald Trump unilaterally withdrew America from Iran’s 2015 nuclear deal with world powers over a year ago. The vessel’s detention and later release by Gibraltar has fueled the growing tensions.

The tanker on Friday changed its listed destination in its Automatic Identification System to Iskenderun, Turkey, a small port on the Mediterranean Sea.

However, mariners can input any destination into the AIS, so Turkey may not be its true destination. On Aug. 24, it had listed its destination as Mersin, Turkey, before removing that from its system. Earlier, it had said it was going to Greece.

Iskenderun is some 200 kilometers (125 miles) by sea from a refinery in Baniyas, Syria, where authorities alleged the Adrian Darya had been heading before being seized off Gibraltar in early July.

Iranian state media and officials did not immediately acknowledge the new reported destination of the Adrian Darya, which carries Iranian crude worth some $130 million.

Turkey’s Foreign Minister Mevlut Cavusoglu denied the tanker was heading to Iskenderun and claimed it was going to Lebanon. Speaking in Oslo, Norway, the diplomat said the Turkish state and Turkish private companies were no longer buying oil from Iran, in line with U.S. sanctions.

On Monday, Iran said the oil on the Adrian Darya had been sold to an unnamed buyer. However, anyone buying it likely would be targeted by U.S. financial sanctions. Analysts have suggested Iran may choose to offload the oil onto another ship first, given the international attention focused on the Adrian Darya.

OnePlus TV is an Android TV with Google Assistant, Chromecast and more