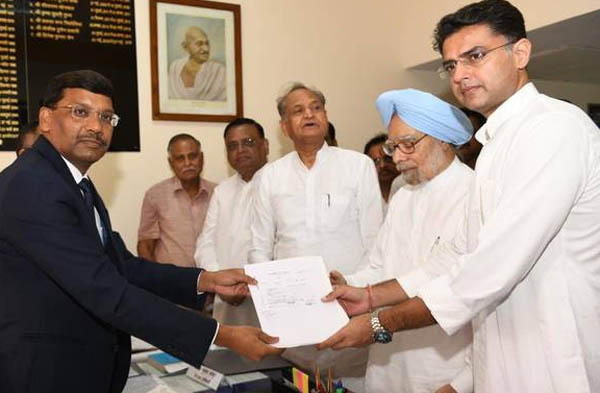 JAIPUR: Former Prime Minister Manmohan Singh is the Congress candidate for by-polls to a Rajya Sabha seat from Rajasthan. He filed his nomination in state capital Jaipur on Tuesday.

Manmohan Singh, 86, was received at the airport by Sachin Pilot, the Deputy Chief Minister and Rajasthan Congress president.

The Congress is confident of the former PM making it to parliament from Rajasthan, where it scored a victory in state elections in December.

The party, with the support of its 100 MLAs, 12 independents and six MLAs of Mayawati’s Bahujan Samaj Party, has the numbers to get Dr Singh through to the Rajya Sabha.

The BJP has not declared a candidate for the seat so far. The party has 73 MLAs in the 200-member Rajasthan assembly.

The by-election to the Rajya Sabha seat is being held after it fell vacant following the death of BJP chief Madan Lal Saini.

Dr Singh, who was prime minister for 10 years until his Congress-led UPA government was defeated by the BJP in 2004, was a Rajya Sabha member from Assam. But the Congress no longer has enough lawmakers to re-nominate him from the north-eastern state. His term ended in June.