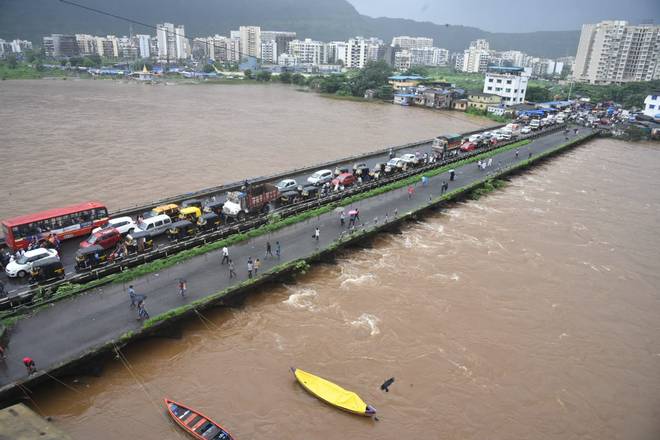 Mumbai: The Indian Meteorological Department (IMD) has predicted heavy rainfalls accompanied by gusty winds on Sunday. IMD has also predicted high tide of over 4.5 metres on Sunday afternoon. The weather body issued an advisory urging residents to avoid outing as far as possible.

One person was electrocuted as heavy rains battered Thane district on Saturday, disrupting normal life due to waterlogging and flooding in some parts. Another person suffered serious injuries after the roof of a bakery in Mumbra caved in. Meanwhile, a high tide of 4.90 meters is expected to hit Mumbai on Saturday afternoon, making it the highest high tide of the monsoon 2019. The BMC has urged people not to venture near the sea. The disaster management cell of the BMC said that a high tide measuring 4.90 metres is likely to hit the city around 1.44 pm.

Mumbaikars continue to reel under heavy rains across the city, with several areas waterlogged. Road, rail traffic and flight operations have been hit due to incessant rainfall in Mumbai, even as the Indian Meteorological Department (IMD) has warned of more “heavy to very heavy falls”. Waterlogging was reported from several areas like Santa Cruz, Nagpada and Sion. Adjoining areas of Thane and Palghar also remained waterlogged as heavy rains continued in the area.

The Central Railway said that rail traffic along the Harbour Line, and between Ambernath and Badlapur, were stopped in the wee hours of Sunday as the water level rose above the rail top.

Related Topics:MumbaiMumbai Rains
Up Next

Mother, daughter die after falling off train to catch thief