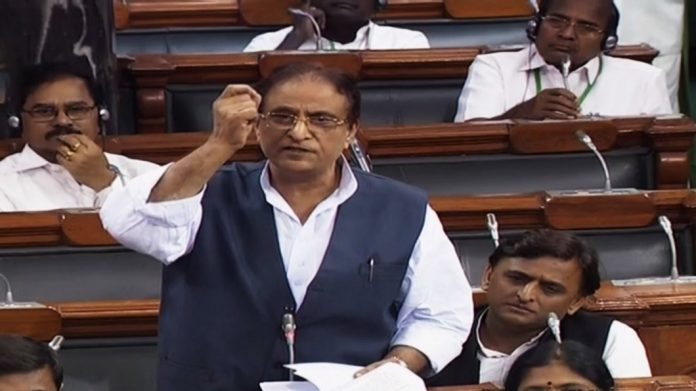 New Delhi:  Bharatiya Janata Party MP Rama Devi said on Saturday that she would not accept an apology from Samajwadi Party leader Azam Khan for his sexist remarks about her, and would instead seek exemplary punishment for him. In an interview with NDTV, Devi said she would have forgiven Khan if he had apologized on the same day when he made the remarks.

Devi was chairing proceedings when Azam Khan made the remarks during a debate on the triple talaq bill on Thursday. When she asked Khan to look at her while speaking as she was in the chair, he said, “Aap mujhe itni achchi lagti hain ki mera mann karta hai ki aap ki aankhon mein aankhein dale rahoon [I like you so much that I wish to look into your eyes and keep looking at you].”

Speaker Om Birla met MPs from all parties on Friday to discuss Khan’s remarks. The legislators suggested strong action against him, after which the Speaker decided to ask Khan to apologize or face action when the House meets again on Monday.

Speaking to NDTV, Devi said she was not present in the all-party meeting. She said: “If Azam Khan had apologized for his indecent statement on the same day, I would have forgiven him. He even walked off on Thursday post making this comment – making a second mistake. I do not want to see him in the House making a third mistake.”

“When he [Azam Khan] gave this statement, I was sitting in the chair of the speaker,” Devi said. “The chair looks where everyone is looked at equality. I respected everyone equally. Azam Khan was speaking directly to MPs when I asked him to address the chair. But soon after, he used words which cannot be repeated here.”

“Every man has a mother, sister, daughter and wife,” Devi said. “Azam Khan’s remark is going to hurt not only women but also the dignity of men.”