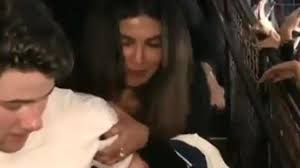 She tripped and almost fell, but his biceps saved her. That’s just what happened with Priyanka Chopra Jonas and Nick Jonas on a recent outing.

In a video doing the rounds, Nick and Priyanka are seen keeping to their routine of walking hand in hand on a stairway. While Priyanka, dressed in black, was busy waving to fans, happy to see the couple, she tripped.

But Nick was by her side in her “oops” moment. She held on to his arm and regained her balance, with a huge smile on her face, followed by a laugh. It is one of those moments that has made Nick and Priyanka one of the most watched out among the celebrity couples on the social media.

OMG: Singer Halsey once considered prostitution for having sex for money