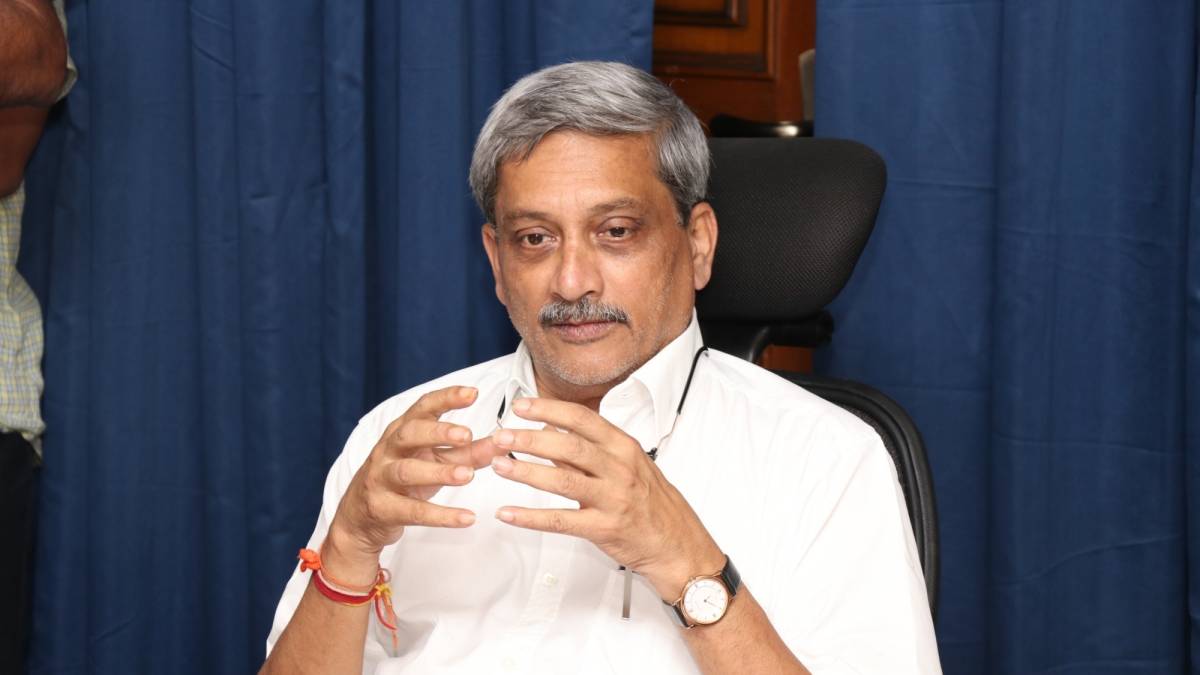 Panaji: It will take a while for Goans to come to terms with the fact that 63-year-old Chief Minister and former Defence Minister Manohar Gopalkrishna Prabhu Parrikar died on Sunday after a protracted battle with pancreatic cancer for over a year.

And the disbelief need not necessarily stem from unadulterated love for the country’s first IITian CM.

In recent years, after several unpopular, controversial decisions, questions were being asked whether Parrikar, who won overall adulation for nearly two decades for his wit, bluster, charm and audacity, was really a salt-and-pepper-haired political rockstar or just a closet groupie clinging to the coat-tails of the casino, mining and real estate industry.

The shock is also rooted in the belief that the trained metallurgist was simply too omnipresent and omnipotent to melt away, just like that. The very fact that he continued in office for a year after he was diagnosed with cancer and occasionally attended office as well as public functions with medical paraphernelia trapped to his person, testified his penchant for not giving up and appearing infallible in the small, but closely followed cosmos of Goan politics.

While Parrikar was undeniably the weave, which determined the quality of Goa’s political fabric for nearly 30 years, there was very little about Parrikar’s public persona which wasn’t a paradox.

He appeared sloppy, but was meticulous in political strategy. He promised much, but actually delivered very little. As Defence Minister, he was obsessed with Goa politics. In 2012, he promised to retire and never contest elections again, but ended up clinging to power from a hospital bed until his end.

He swore to end casinos, illegal mining when in opposition, but failed to crack down on them when in power.

But paradoxes apart, the young boy born in a nondescript town called Mapusa, to a Gaud Saraswat Brahmin family of grocers in Portuguese-held Goa, rose to be India’s Defence Minister and was partly credited with carrying out cross-border surgical strikes along the country’s eastern and western borders.

Parrikar has explained his fabled transition well. The way only the former IIT-Mumbai alumnus can; with an anecdote.

“So I have done my duty (as Defence Minister) for the nation. Probably, that was a loan that Goa owed, that needed to be paid back. The Indian Army (had) liberated the State,” he said in July last year, while speaking about his stint as Defence Minister.

There is no doubt that Parrikar will go down in history as Goa’s most successful politician ever.

Working in tandem with Rashtriya Swayamsevak Sangh veteran Subhash Velingkar, Parrikar was the cornerstone of BJP’s rise in Goa, from a party whose candidates routinely lost poll deposit fees in the late 1980s through early 1990s, to a powerful outfit which won a simple majority in 2012.

But somewhere along the meteoric rise, says his mentor-turned-foe Velingkar, the BJP became Parrikar and Parrikar became BJP in Goa.

Sanjeev Verenkar, who authored a character sketch of Parrikar in his book ‘Hada Masachi Devla’ (Temples of Flesh and Bone) credits his stunning rise to several unique qualities.

“His memory was as astounding as his vision. He was sharp, incisive at analysing situations could take quick decisions and I have never seen him tire… He had one fatal flaw. It was his disregard for another person’s opinion. He underestimated others,” says Verenkar.

Vijai Sardesai, Parrikar’s critic-in-chief as a legislator from 2012-17 and now a ruling coalition ally, recalls his first meeting with Parrikar in the 90s.

Just out of agricultural college, Sardesai had pitched Parrikar for help in winning university student elections. The latter turned him down point-blank.

Sardesai later went on to win the polls, but thirty years later, his nostalgia has traces of irony.

“It is ironical, that decades after he dismissed my plea, I now played a part in bringing Parrikar back to Goa. I insisted with the central BJP leadership that my party, Goa Forward, will join the coalition only if Parrikar is CM,” said Sardesai.

Parrikar’s first stint as CM was in 2000, after he staged an internal coup against a coalition government of Congress rebels supported by his BJP MLAs, when then CM Francisco Sardinha was in Australia.

In the turbulent 1990s, when Goa saw 13 CMs in 10 years, coups were routine and according to political observer Trajano D’Mello, Parrikar had mastered the art of the perfect coup.

“Goa had seen coups before, but Parrikar’s political signature was clinical ability to prey on the greed of MLAs. He tempted them much, but actually gave them little,” D’Mello says.

Incidentally, Parrikar served as CM on four occasions, but could never complete a full term in office.

In his first stint he dissolved the assembly mid-way. His regime was toppled during the second term as CM. In his third term, he was elevated as Defence Minister. In his fourth term, death snatched him away.