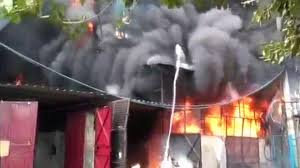 A fire broke out at a shoe factory here on Tuesday, said an official, adding that there were no reports of any casualty.

The blaze, that broke out at 3.15 a.m., spread across three factor of the factory located in the Narela industrial area,

“Fourteen fire tenders were rushed to the spot and cooling operation is underway,” the fire department official said.

The cause of the blaze is under probe, he added.

Vikas Dubey was killed in a police encounter on Friday in Kanpur, Uttar Pradesh. Now the Enforcement Directorate (ED) of Lucknow zone is collecting the details of the properties development and its special people. A letter was also written in this regard on July 6 to IG Kanpur Range Mohit Agarwal . An ED team has also met the IG for property details. Vikas made more than 10 foreign trips in the last three or four years.

If sources are to be believed, the ED file a case under the Prevention of Money Laundering Act (PMLA). Investigate matters related to the development of Vikas and his gang members.It is suspected that Vikas has also invested in Thailand and Dubai.

UP STF detained Jai Bajpai, a resident of Kanpur, a week ago. Jai was considered as a investor of Vikas Dubey. The inquiry has revealed that Jai used to convert Vikas’s black earnings to white. He invested development money in hawala, property and other businesses. The investigation revealed several illegal assets of Vikas and his dealings with Jai. Now the ED has asked for its details.

The ED team is collecting information about the assets and bank accounts of Vikas and his family members and their other associates. Property related to Jai and others, information related to the bank has also been sought from the Kanpur police. A senior ED officer admitted that one of his teams had gone to Kanpur in this regard. If the information worth registering the case is found then it will be done.

According to sources, Vikas and his close friends have bought properties worth crores of rupees in Dubai and Thailand. Recently, Vikas had also bought a 20 crore house in Lucknow. He has traveled to more than 10 countries in the last 3-4 years. Vikas has a flat in an apartment in Aryanagar, Brahmanagar in Kanpur and a Kothi in Panki.