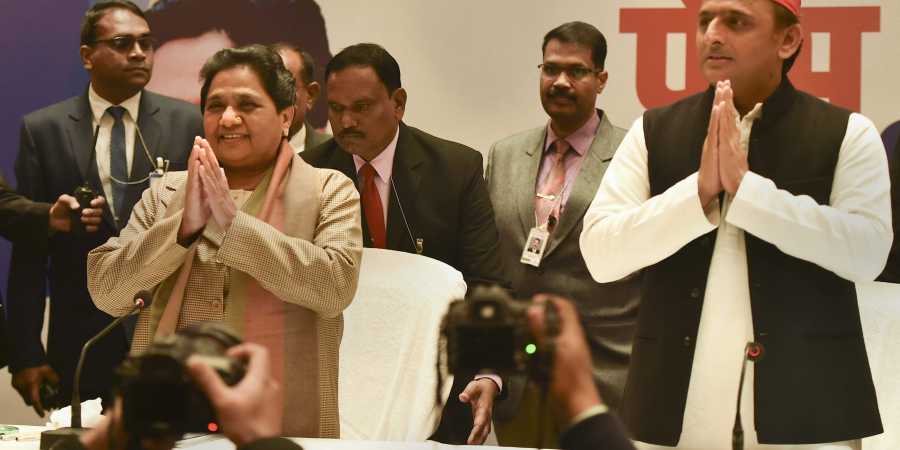 Arch rivals Bahujan Samaj Party (BSP) and Samajwadi Party (SP) announced on Saturday that they will contest the coming Lok Sabha polls together in Uttar Pradesh sharing 38 seats each of the 80 in the state while leaving Rae Bareli and Amethi for Congress, which has been kept out of the alliance.

The other two seats have been kept vacant for “one or two allies”, said BSP chief Mayawati at a press conference here jointly addressed by her SP counterpart Akhilesh Yadav at a five-star hotel.

Answering questions, Mayawati said the alliance will go “far beyond” the Lok Sabha elections and that the two parties would stick together to fight the Assembly elections later. The two parties will keep their personal differences aside to end “the monstrous rule” of BJP, she said.

On his part, Akhilesh hinted at supporting Mayawati as a Prime Ministerial candidate. “Uttar Pradesh has produced numerous prime ministers in the past. You know whom I will support. I will be happy if another prime minister comes from the state.”

Mayawati described the alliance as a “new political revolution” taken in national interest to stop the BJP from coming to power again.

“We will rob Modi-Shah duo of their sleep,” she said. The two leaders said that they will jointly fight the BJP and ensure that it is defeated in the Uttar Pradesh which sends the largest number of 80 MPs to Lok Sabha.

“The Bahujan Samaj Party and Samajwadi Party will each contest 38 seats while two seats have been left for one or two parties. We have also decided to leave Amethi and Rae Bareli seats for Congress though we do not have alliance with it,” Mayawati said. 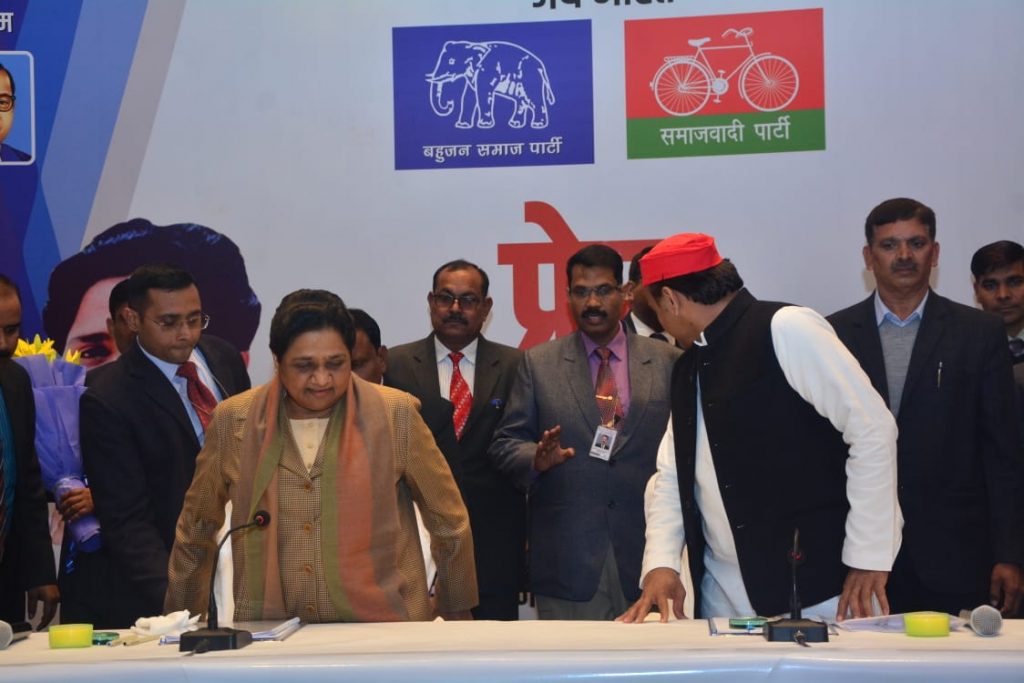 The coming together of the two parties, which were swept away by the Modi wave in the 2014 Lok Sabha and the subsequent Assembly polls in 2017, has been viewed by analysts as a possible game changer. In the last Lok Sabha polls, the BJP won 71 seats on its own while its ally Apna Dal picked up two. The BSP drew nil, while the SP won five and Congress two–all family pocketboroughs.

She said the seat-sharing between two parties was decided at a meeting in Delhi on January 4 and the distribution of seats has also been broadly worked out. It will be made public through a press release.

She said Amethi, which is represented by Congress President Rahul Gandhi and Rae Bareli, represented by UPA Chairperson Sonia Gandhi, have been left for Congress as they do not want BJP to “complicate” matters.

Mayawati slammed both Congress and BJP and said that the two parties have pursued similar policies in the past.
Giving reasons for excluding Congress from the proposed grand alliance, she said “we ensure transfer of votes to them. But they are not able to reciprocate it.”

She said ever since reports of the tie up between the two parties had appeared, the BJP got “scared” and conspired to weaken the alliance as part of its strategy. It was “misusing” state machinery and targeting Yadav, whose name cropped up in the media in the alleged mining scam.

“The BJP should know that after this the alliance has got further strengthened,” she said and appealed to people not to waste their votes on the outfits such as that floated by Shivpal Yadav, estranged uncle of Akhilesh, on whom “the BJP is splashing money like water”. She suggested that as part of this strategy, parties may be floated to attract Muslim votes.

On his part, Yadav said that he decided to have an alliance with the BSP ever since the BJP leaders “drunk with power” abused her. In future, any insult to Mayawati will be his personal insult, he said appealing to SP workers to work in the spirit of brotherhood with BSP cadre.

She said the experience of both the parties had been that they do not get any special benefit by keeping Congress in the alliance. “This has been the experience so far. We honestly ensure transfer of votes due to which Congress and other parties are benefited. But we are not able to benefit in a similar way. Either Congress is not able to do it or it deliberately supports the rivals.”

She said SP also felt the same way after tying up with the Congress in the last Assembly elections. “In the future also BSP will not have alliance with Congress or any other party which is not able to transfer votes but causes political damage. ”

Mayawati said in the bye elections in Gorakhpur and Phulpur last year the transfer of votes between BSP and SP was smooth and successful. She also recalled that the Congress lost its deposit in one of the bye elections.

“The BSP and SP alliance will not allow BJP to come to power at any cost and has the capacity to stop BJP from coming to power again by stalling it in Uttar Pradesh, provided the electronic voting machines are not tampered with and they do not “play” with emotions on the Ram Temple issue.

The two leaders said ever since BJP came to power communal and caste politics have emerged in a big way.

Mayawati compared the current situation in the country to that in 1977 and said while the Congress had imposed emergency then, now it is a state of “undeclared emergency”. The government is misusing state machinery and digging up old and settled issues, she added.

Mayawati said demonetisation and GST had dealt severe blows on the common man. The country was undegoing a severe agrarian crisis, The minorities and dalits were being ignored and the people of the country were waiting to oust the BJP government. Akhilesh in his remarks echoed her sentiments.

She accused Congress and BJP of indulging in scams in defence purchases and referred to Bofors which had thrown the Congress out of power and now the Rafale would do the same to the BJP. 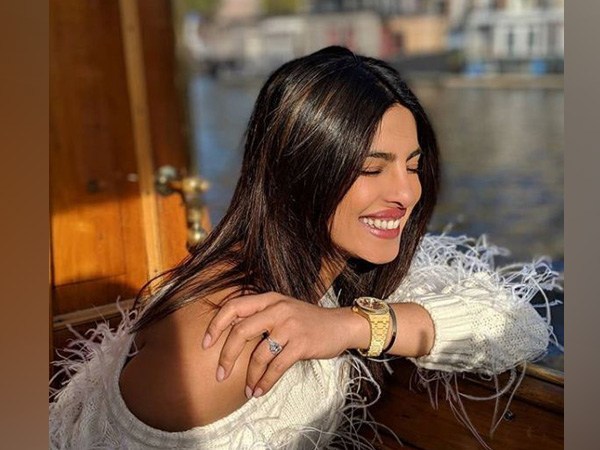 Actress Priyanka Chopra Jonas has started preparation for her next romantic drama, tentatively titled Text For You, co-starring Grammy-winner Celine Dion and actor Sam Heughan. Through her Instagram Stories, Priyanka also revealed that she will start shooting for the project on Friday.

She shared several pictures from her prep mode, in which she is seen getting her hair and nails done before she begins work. The photographs showed Priyanka wearing a mask while getting a manicure. Her hair is covered in plastic sheets, hinting at new hair colour. “Prep… starting text for you on Friday,” she wrote with the photos.

Written and directed by Jim Strouse, the film is an English remake of the German-language film “SMS Fur Dich”, based on Sofie Cramer’s novel.

According to the storyline, Priyanka’s character is a heartbroken woman who has just lost her fiance. In her attempt to send constant messages to her fiance’s old number, she will connect with a man across town suffering from a similar heartbreak. Celine Dion’s music aims at connecting the two and give them the courage to take a second shot at love.

Heughan is best known for his role as an actor and producer in the hit series “Outlander”. He was recently seen in the Vin Diesel-starrer comicbook flick “Bloodshot” and in the action comedy “The Spy Who Dumped Me”, co-starring Mila Kunis, Kate McKinnon, Justin Theroux and Gillian Anderson.

Priyanka will next be seen in the film adaptation of “The White Tiger”, which she has also executive produced, and “We Can Be Heroes”, directed by Robert Rodriguez. She is currently developing an untitled comedy with Mindy Kaling and Dan Goor, and also working on Russo Brothers’ “Citadel” and “The Matrix 4”.

Meanwhile, Priyanka Chopra Jonas said that her upbringing has played a crucial role in shaping her personality.

“I am a product of traditional India and its ancient wisdom, and modern India and its urban bustle. My upbringing was always an amalgamation of the two Indias and, just as much, of East and West,” she said.