Christians in both the states celebrated the festival with religious fervour and gaiety with congregations and special prayers in churches since the early hour of the day.The festivities began with midnight mass at many churches in Secunderabad, which has a sizeable population of Christians.A major congregation was held at the 200-year-old St John’s Church in Secunderabad. Hundreds of Christians also attended the mass at St Mary’s Church, All Saint’s Church, Wesley Church, Holy Trinity Church and Millennium Methodist Church. The priests prayed for peace and highlighted the message of Jesus.

The Anglo-Indian community in Lalaguda in Secunderabad celebrated Christmas with enthusiasm and in a traditional manner. In Little England, as Lalaguda is known, the community celebrates the festival in their unique style.Cake and wine making at home is an integral part of the celebrations for the community.Attired in their best, men, women and children attended the midnight services in specially decorated churches. Prayers in some churches began early Sunday.Christian families cut the cakes as part of the celebrations and greeted one another on the occasion.

The three-day celebrations also began at the historic Church of South India (CSI) at Medak, about 100 km from here. Believers carried a decorated cross into the church and placed it before a specially-erected hut.Medak Church, the second biggest of its kind in Asia, was constructed between 1914 and 1924. It has been built with granite in the Gothic style with story of Bible painted on its stained glass windows.

Telangana Chief Minister K. Chandrasekhar Rao, his Andhra Pradesh counterpart N. Chandrababu Naidu, Governor of the two states E.S.L. Narasimhan and leaders of various political parties greeted people on the occasion of Christmas.”The birthday of Lord Jesus, who taught us love and compassion, is celebrated worldwide with happiness and joy,” said Chandrasekhar Rao.”Christmas is a time of joyous remembrance of Jesus Christ. It is also an occasion to renew the bonds of love, tolerance and compassion which Jesus had taught the world,” Narasimhan said in a message. 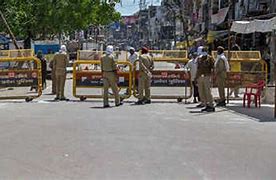 The Uttar Pradesh government on Wednesday (May 5) extended the lockdown-like restrictions till May 10 in view of the massive upswing in COVID-19 cases.

The ‘corona curfew’ will now be enforced till 7 am on May 10.

“The corona curfew from Friday 8 pm to Tuesday 7 am, which was extended on May 3 for 48 hours and is in force till May 6 till 7 am has been further extended till Monday (May 10) 7 am,” an official spokesman was quoted as saying by PTI. He added that further decision to extend the curfew will be taken on Sunday.

All shops and establishments will now remain closed till Monday 7 am. All essential services and vaccination drive has been exempted from this curfew.

Earlier on May 3, the curfew was extended till 7 am on May 6. On April 29, the state government had announced that weekend lockdowns will include Mondays as well.

Meanwhile, Uttar Pradesh recorded 25,858 new daily cases and 352 fatalities on Tuesday, as per official government data. The active COVID-19 cases climbed to 2,72, 568 and the death toll mounted to 13,798 in the state.